A near-empty section of National Highway No. 2 on Saturday, the first day of the Dragon Boat Festival long weekend. Photo: CNA

Dragon Boat weekend traditionally brings a surge in travel, as people head back to their family homes to celebrate, but, in the midst of the widespread domestic coronavirus outbreak, the government had repeatedly urged the public ahead of time not to travel, to reduce the chances for further spreading of the disease.

All the indications are that the public took the advice to heart. Since the introduction of the Level-3 alert in May, transport authorities had already introduced various crowd control measures and sought to keep their load factors below 20%. Figures released recently show passenger flows over the holiday were a fraction of those last year. High Speed Rail use was 95% down, Taiwan Railways numbers dropped by 98% and bus passengers were off by 89%.

Just as encouragingly, people did not jump in their cars instead. The Highways Bureau was aiming for no more than one million cars on the freeways each day. On Sunday, the figure was 760,000, half of the volume in 2020 and the number of long-distance car journeys (150 km+) decreased by 65% on Saturday and 71% on Sunday.

Apple’s Mobility report also shows a consistent trend before and during the holiday, although personal car use jumped a little on Friday 11 June, the day before the official holiday, but it has consistently been well below the norm since the government advisories on staying home came in during May.

Google’s mobility data point to the same conclusion, with people spending up to 30% more time at home in recent weeks. 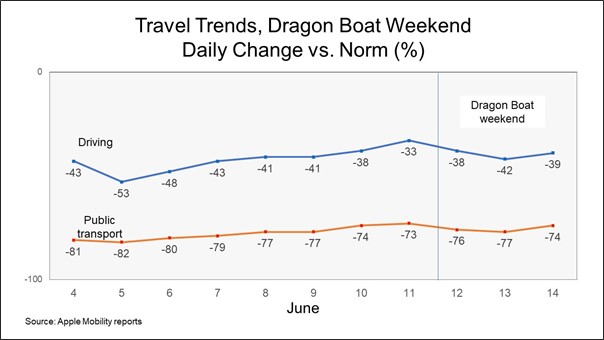 The final indicator of the impact of the campaign to minimise travel and social gatherings will come in the next few days, when the CECC reveals whether the declining trend in the number of new Covid cases is continuing or whether there is a renewed upsurge, just as there was a week after Mother’s Day