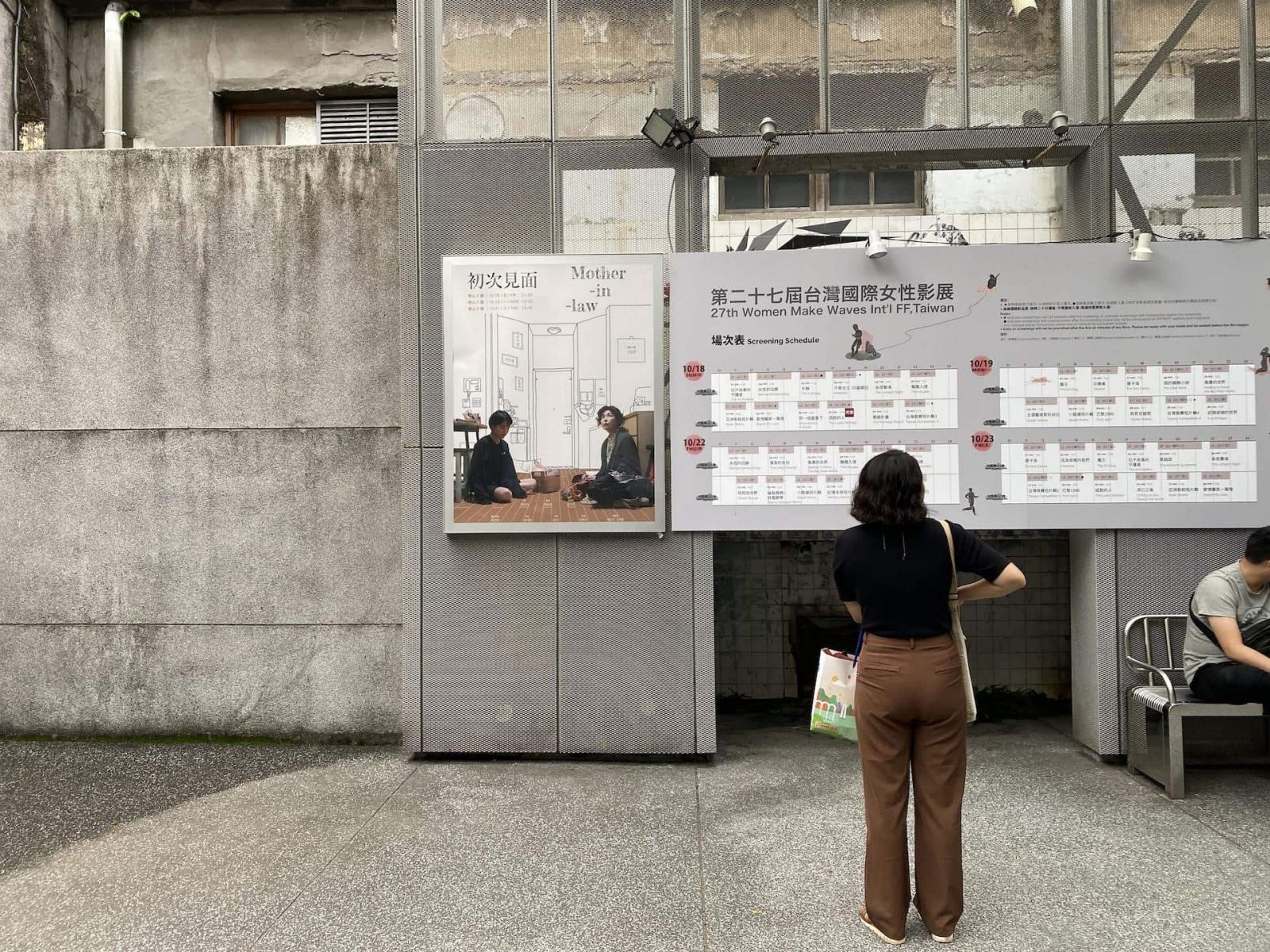 “Have any of you ever hit your kids?”

The young girl in the front row of this Women Make Waves Film Festival panel discussion asked the five women sitting before her. The women, including her own mother, documentary filmmaker Huang Hui-Chen (黃惠偵), chuckled, before earnestly sharing their respective answers with her – and the rest of the audience.

For a film industry event, this talk was a decidedly more family-friendly affair. Excluding festival director Pecha Lo (羅珮嘉), every panel speaker came armed with their children – and the ‘teammates’, as they jokingly dubbed, with whom they share child-rearing duties.

A festival dedicated to supporting female talent and promoting gender equality, Women Make Waves is now in its 27th year – making it one of Asia’s largest women’s film festivals, as well as one of Taiwan’s oldest film festivals, second only to the Golden Horse Film Festival.

If last year’s theme of ‘Beyond Control’ followed on from the snowball effect of the #MeToo movement, this year’s theme of ‘Femture’ prioritises the various ways in which feminism might take shape in the future. This edition zeroes in on non-conforming identities and transgressive politics, showcasing a diverse range of film protagonists, including the teenage mothers at the centre of Maternal (2019), or the female factory workers attempting to unionise in Made in Bangladesh (2019).

In thinking about ‘femture’ and the kinds of female narratives that might be had tomorrow, the festival also brought to light the working conditions faced by women today. Looking inwards, female filmmakers were invited to speak on their experiences in an industry that is still largely dominated by men – so much so that Pecha Lo prefaced the ‘Life in Film-TV industry as a Woman’ panel discussion with startling statistics: “On average, it takes seven years for a female director in Taiwan to make another film. And one-third of female directors don’t make new work after having a family.

Motherhood is one of the primary obstacles to breaking the glass ceiling for women in the film and TV industry. Many women even delay or outright reject the concept, seeing it as something diametrically opposed to an industry that demands irregular working hours, flexibility, and overtime. As producer and former film festival curator Jewel Chen-Lin Lai (賴珍琳) put it, she had looked on in awe when she did see the very few women Doing It All – and naively thought she could do the same when she became pregnant.

“I even likened myself to a farmer sowing seeds in the fields, with a child on their back, but this was all a fantasy,” she laughed.

The reality, of course, is much less pleasant:  “When my son was about one year old, I took him to a closed-door National Culture and Arts Foundation meeting,” Lai said, as her now five year-old son played in the background. “I had to speak to the group while breastfeeding… by that point, you’ve already lost all sense of shame, and people can really read the defeat on your face.”

Lai gestured to Huang Hui-Chen on her right: “I’m also grateful to her; she was also present that day. After breastfeeding, my son started to cry, and without saying a word, she grabbed him and took him to another room.”

A veteran in the industry, much of Huang’s work has been informed by gender issues, particularly those pertaining to marginalised women. Having been brought up mostly by her mother, who left her husband after suffering years of domestic violence, she brought her intimate mother-daughter relationship to the big screen in 2016, with the documentary Small Talk, earning her a Teddy Award for Best Documentary Film at the 2017 Berlin Film Festival, as well as being selected as the Taiwanese entry for the Best Foreign Language Film at the 90th Academy Awards.

Huang’s own daughter is now eight years old. Years earlier, she, too, had been through similar battles, on the same grounds, as Lai. She said she wanted to challenge pre-existing notions of work and family, often wanting to see how far she could push it. “Why is it the norm? Why is it something we ‘can’ or ‘cannot’ do? So, I wanted to see if I ‘can’,” she said. “But, of course, you’ll still worry and be scared about whether or not bringing your child to work will affect things,” 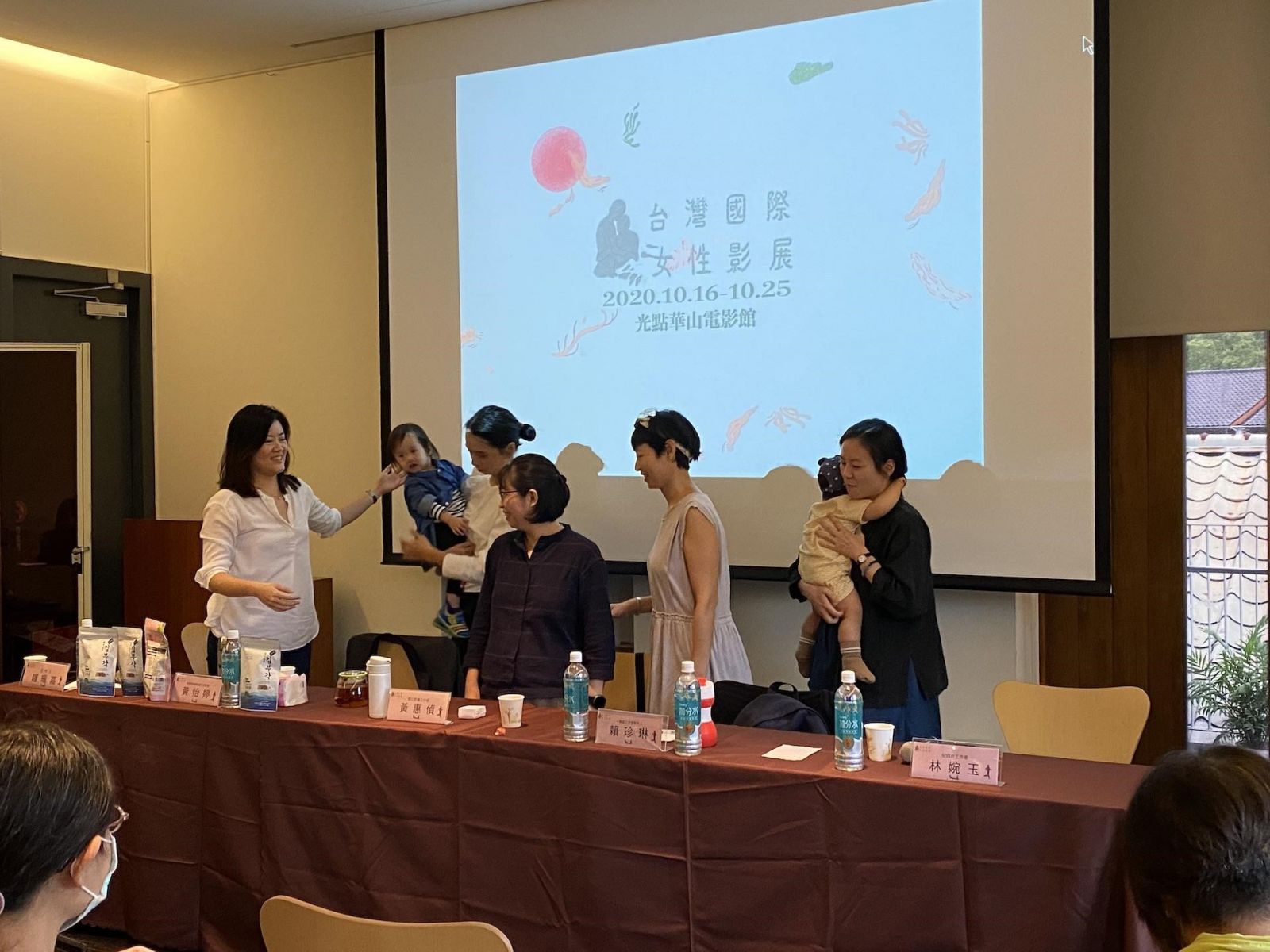 Panellists with their children at the Women Make Waves ‘Life in Film-TV Industry as a Woman’ talk.
Image courtesy of Joanna Lee

However, both Lai and Huang said they were thankful for ‘the upside of the Film and TV industry’ – a penchant for egalitarianism amongst their colleagues. “Whenever there was a situation in which a colleague could have potentially started to feel annoyed about having my child present, many men spoke up in support of me,” Huang said. “It was incredibly encouraging.”

These modern attitude shifts reflect the macrocosm of Taiwan, as the country continues to inch towards a more gender equal society. On a policy level, progressive changes, including the high-profile legalisation of same-sex marriage, as well as the decriminalisation of adultery, have allowed Taiwan to take on the soft-power prestige of ‘Asia’s most democratic country’. It has garnered titles like, first in Asia for gender equality and first in Asia for legal protections for female employees and entrepreneurs.

The establishment of the ‘Gender Equality Policy Guidelines’ in 2011, and the subsequent formation of the Gender Equality Committee under the Executive Yuan a year later, have allowed policymakers to focus on setting and meeting key objectives, such as narrowing the gender pay gap and the representation of women in decision-making roles. To Taiwan’s credit, not only has the gender pay gap declined from 18.6% in 2008 to 14.6% in 2018, putting Taiwan’s figures lower than Korea’s 34.1% (2017), Japan’s 32.3% and the United States’ 18.9% (from the Gender Equality Committee’s 2020 report), it now also has record high female representation in politics, with 42% of current legislators being women.

For the film industry itself, however, men still largely dominate the managerial ranks, across filmmaking, distribution, post-production and more, making up 57.95% of the overall bracket (from 2018 BAMID figures). On a more anecdotal level, Pecha Lo noted that the disparity between the expectations of men and women is what leads to more men being able to be on location for days or weeks on end, as well as the lack of female filmmakers and workers in their thirties.

As Chris Horton noted in Nikkei Asia earlier in the year, despite impressive metrics and a progressive image in the eyes of international media, women are still pressured to take on child-rearing under Taiwan’s prevailing patriarchal social values.

It’s clear that things were never easy for women like Huang and Lai, both of whom have held decision-making positions (Huang was the former secretary-general of the Taipei Documentary Filmmakers' Union; Lai was the CNEX Taipei Documentary Film Festival curator). For them, the juggling act of being a mother and a successful career woman is made even harder by the lack of safety-nets for physical, emotional, and financial wellbeing.

“Those biological processes, like lactating, are incredibly painful. When I hear of mothers who can breastfeed and go to work at the same time, and her work environment allows her to breastfeed every four hours, it’s so amazing,” Lai said.

For panellist Jessica Wan-yu Lin (林婉玉), many new mothers have to contend with balancing their mental or emotional states, from being a new mother and not making any money to regaining one’s confidence to work creatively again. She described her experience as one filled with anxiety.

“But as my husband tells me, if there’s no anxiety, you can’t produce creative works,” she said, laughing, albeit with a slightly pained expression.

Lin is married to Lau Kek Huat, director of 2019 Boluomi – for which she also edited. Though a director in her own right, having helmed the 2015 documentary Tpe Tics, which won the Taipei Film Festival Special Jury Award that year film, she is more prominently known for her editing work – something Pecha Lo prescribed as one of the most gruelling jobs in the film and TV industry. Due to its shift-work nature, it’s something that can make child-rearing even more difficult to manage.

With the establishment of the Gender Equality Policy Guidelines, individual gender equality and gender mainstreaming units within central and local government bodies, like the Ministry of Culture, have since been formed to address key issues in their respective sectors. For the cultural industries, the Ministry of Culture has committed to supporting organisations like the Women Make Waves festival in screening films on gender-related issues to raise gender equality awareness in Taiwan, as well as promoting family diversity through cultural activities.

However, the larger, systemic issue of eliminating prejudice based on stereotyped gender roles and the promotion of child-rearing as a joint responsibility still hangs, and perhaps female filmmakers can only stop seeing motherhood as a roadblock to creativity when it fully dissipates.

“And well, if it’s a seven-year gap, then I’ve only got two years to go,” Lin said, as the women all burst into laughter.