Taiwanese filmmaking, as is the case with Taiwanese democracy, makes advances, but there are growing pains A Malaysian student and a Filipino migrant worker find solace in one another in Lau Kek Huat’s Boluomi. Meanwhile, a Vietnamese woman grapples with her life as a ‘migrant bride’ in Taiwan, in Sally Wu’s documentary The Good Daughter. In the center of these recent films from Taiwan, characters who are not ‘Taiwanese’ bring into question what it means to be Taiwanese today, especially as the country continues to develop as a young, thriving democracy.

“A lot of really young directors are coming out to tell the story, from their own perspective, of how to look at their national identity,” says Benson Wu, the festival director of Taiwan Film Festival in Australia, which screened both films as part of this year’s programme.

Taiwan Film Festival in Australia is a young festival, having just concluded its third edition on 31 July. With a small programming team painstakingly selecting around ten films out of 100 or so for every edition, Wu tells me via Zoom that he was especially taken by the filmmakers exploring stories centered around Taiwan’s new migrants this year – something he says many Taiwanese avoid: “They pretend this kind of society doesn’t exist.”

“But if you look at the older generation, a lot of parents were actually born in Vietnam or the Philippines, and these kids all grow up in Taiwan but can’t really identify with [their] background – which is a bit sad,” he says. “But I feel like we’re starting to see this kind of storytelling come out.”

Boluomi and The Good Daughter are just two films from a new generation of filmmakers who are responding to the changing face of broader Taiwanese society – and highlighting or challenging the social or political issues that underpin it. In addition to exploring Taiwan’s new migrants, other films in recent memory have sought to shed light on a range of contemporary topics, including sexual assault, student protest, local politics and even more prominently, gender identity and other LGBTQ themes.

Many of the Taiwanese New Wave auteurs of the late ‘80s and ‘90s have broached LGBTQ themes, as famously seen in Ang Lee’s Wedding Banquet (1993), or Tsai Ming-Liang’s Vive L'Amour (1994). However, the open embrace of these stories by the mainstream today is a relatively new phenomenon, reflecting the major strides Taiwan has made in recent years to transform itself into a champion of progressive politics in the region, most visibly through the high-profile legalization of same-sex marriage in 2019.

“After it became a mainstream topic in the media, of course the commercial side of the film industry started to pick it up and use it as a product to sell,” Wu says. 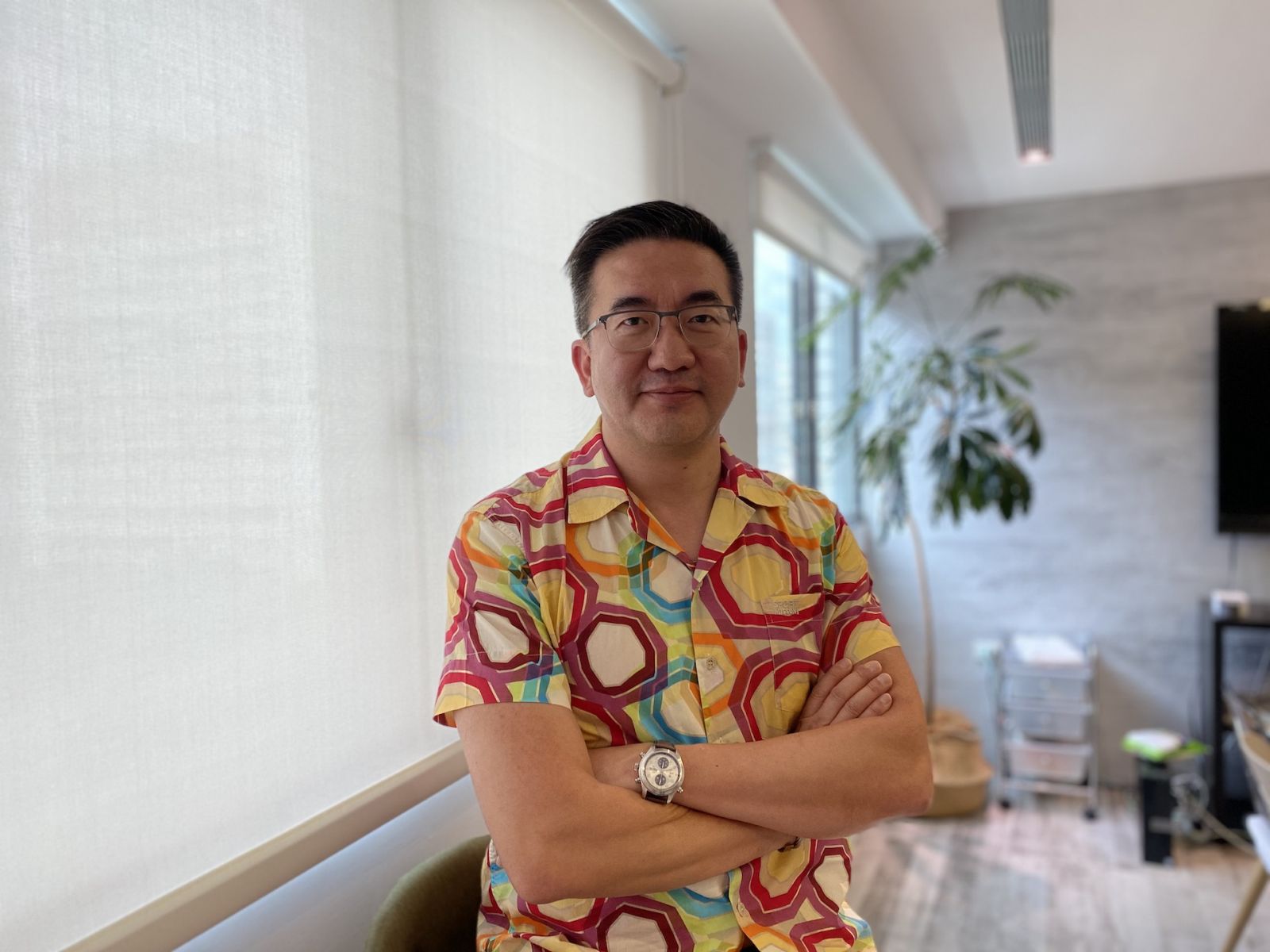 Entrepreneur and activist Jay Lin at the Portico Media office

Jay Lin is a man who is, in many ways, right in the intersection of both social activism and the film industry. Not only is he a cofounder of the Taiwan International Queer Film Festival, the last few years have also seen him advocating marriage equality through the Marriage Equality Coalition, as well as expanding his media company Portico Media. For him, the ‘lack of fear’ of LGBTQ themes within Taiwan’s film and TV industry is already something that sets Taiwan apart from many other countries in the region.

“You see that trickling down to TV stations, OTT services, or more production companies willing to take on LGBT stories and characters. That in itself is quite inspiring and quite courageous, compared to other situations in Asia.”

Indeed, in a region dogged by government censors and social stigma, which Lin likens to Hollywood’s production code of the ‘30s, the ‘other situations’ of Asia can result in rom-coms featuring gay characters taking on ‘R21’ classifications (as was the case for Love, Simon in Singapore), gay scenes being edited out, or Oscar winners being inexplicably pulled from festivals (Call Me By Your Name at the 2018 Beijing International Film Festival).

China’s censoring of LGBTQ themes reflect more broadly the notoriously hostile restrictions that pervade the country’s film and TV industry, which can be as extreme as banning the Winnie the Pooh film Christopher Robin, allegedly due to that cartoon character’s likeness to president Xi Jinping. These restrictions also find their way into neighbours Hong Kong and Taiwan, with those working within the industry often asked to pledge allegiance to the ‘motherland’.

Most recently and most famously, China’s film regulator caused an uproar in the Chinese-speaking world last year by banning filmmakers’ and actors’ participation in Taiwan’s ‘Chinese Oscars’, the Golden Horse Awards.

Such strict control of the media seems far removed from contemporary Taiwan, a country that has come a long way from its own authoritarian roots. It’s easy to forget that Taiwan had political dissent and creative freedom under its own chokehold during White Terror, a period that is inextricably tied to the development Taiwanese cinema itself, and that which is central to many of the acclaimed and beloved films from the ‘Taiwanese New Wave’. Edward Yang’s A Brighter Summer Day (1991) and Hou Hsiao-Hsien’s A City of Sadness (1989) are both direct responses to martial law of 1949 to 1987, as well as products of the country’s gradual shift away from authoritarian rule. And while White Terror found itself front and center once again in the recent blockbuster thriller Detention (2019), it is, in many ways, becoming more of a scary plot device, rather than a lived reality, for a younger generation of Taiwanese cinemagoers today. While filmmakers today don’t have to wrestle with censors, at least locally within Taiwan, the challenges of funding often place them in the same predicament.

Benson Wu says that although there are new filmmakers, like Lau Kek Huat and Sally Wu who are willing to delve into that which is more challenging, a lot of filmmakers are still self-censoring – or at least, “censoring in the way that they are avoiding the real issues” – in order to be commercially viable.

“I think they just want to survive,” he laughs, defeated.

He says films like The Good Daughter also face pressure from cinemas skeptical about their ability to sell, often becoming relegated to select cinemas and few screenings.

But Jay Lin says audiences do want more diverse stories, even if that support is scattered.

After being involved in running the Taiwan International Queer Film Festival, Lin had begun to see growing demand for queer content, not just in Taiwan but also in Asia and beyond. This propelled him to launch his own OTT (over-the-top-media) service, or streaming platform, in 2017 – the LGBTQ-focused GagaOOLala, which now has titles ranging from queer classics from Tsai Ming-Liang to a variety of gay and lesbian romcoms from the Asia region.

“I realised this is a real opportunity for us to address a group of audience [whose needs] are not being met and that have a desire,” he says. “The supply is definitely out there.”

Now, having just launched worldwide streaming back in May, Lin has already seen trends that indicate an increasingly diverse pool of viewers. Joking that he is not so secretive, unlike Netflix, Lin says he is even seeing a rise in viewership from straight women all over the world, who are invested in gay soap operas produced in places Taiwan and Thailand. With the government set on exporting Taiwanese cinema to the rest of the world, especially through task forces under the Ministry of Culture, such as the Taiwan Creative Content Agency and Taiwan Cinema Toolkit, Benson Wu says the Taiwanese film industry is hitting “a really critical point at the moment”.

Citing bigger filmmakers, actors, platforms and projects being prioritised, he worries that new filmmakers are going to get left behind: “The smaller filmmakers really need support and that’s really going to help the Taiwanese film industry.”

Wu has a huge stake in new filmmakers – since he has been adamant on not featuring too many of the films from “those four directors” in his programmes. As he says: “In the center of the direction of the film festival is actually to introduce new directors, who are just as good as Hou Hsiao Hsien, or Tsai Ming Liang.”

He tells me he is often asked if there really are that many good Taiwanese films he can play every year, joking that he may have no choice but to play the Taiwanese New Wave films eventually. Even so, he is still hopeful about Taiwan’s new crop of talents.

“They don’t really copy the old legends’ styles – they’ve got their own style. I’m quite excited,” Wu says, wanting to end our chat with a ‘happy ending’.