Unlike their confrontational counterparts in Europe, Taiwan’s chapter of the Extinction Rebellion takes a creative approach to raising environmental awareness

To protest what they perceive as insufficient haste in dealing with climate change, activists from Extinction Rebellion (XR) in Europe have blockaded bridges, sprayed government offices with fake blood, glued themselves to roads, buildings and trains, and generally been making nuisances of themselves.

Inspired by Mahatma Gandhi, Martin Luther King Jr. and the women’s suffrage movements, XR views arrest and imprisonment not as things to be endured but, rather, as a way of drawing attention to their cause and stymying courts and legal systems.

In Taiwan, no one has come close to getting arrested. The police have not even had to ask them to move on.

“We always tell them in advance what we’re going to do,” says Jen Maler, an English teacher from the USA who founded the XR Taiwan chapter, “and apply for a licence when necessary.”

The Taipei police must have looked up Extinction Rebellion on the Internet, however, and been dreading the worst. At the group’s first action in September last year, police officers outnumbered demonstrators by about three to one.

That action, which Maler titled a Funeral for the Earth, was held at Taipei’s Daan Forest Park. Jen Maler and fellow XR rebels hold a Funeral for the Earth at Daan Park, September 2019

“We marched slowly around the perimeter carrying a framed photo of the deceased planet, while Auld Lang Syne was played on a trumpet as is typical at some Taiwanese funeral processions.” At the Heping-Xinsheng and Xinyi-Jianguo road intersections, activists performed a ‘die-in’, where they all fell down as if dead, then gradually stood up, before reciting their own poetry and reading statements, in Mandarin and English, explaining XR’s demands for rapid reduction in greenhouse gas emissions and for citizens’ assemblies to direct traditional parliaments on matters of climate and environment.

“I think we caught the attention of the public, but not as much as we would like to. People stopped and watched, maybe recorded the event and scanned our QR code” (the group eschews handing out flyers), “and some asked questions.”

Despite their use of Chinese as well as English, there were a few negative responses on social media, however, albeit by other foreigners not by Taiwanese. Since then, actions have been carried out in Mandarin only, but the issue of the group being led by, and largely participated in by foreigners continues.

This is something which concerns Maler too.

“The most important priority I currently have is to find a local person who can also take the role of national coordinator and we can work together. I would also like to run the [planning] meetings in Chinese, and have another group in English for those who cannot speak Chinese. Finally, I want to grow the chapter with the main focus on getting more Taiwanese members.”

Interestingly, this is not something that seems to worry local XR Taiwan activists. Austina Cheng, a former career diplomat who was posted to London by the Ministry of Foreign Affairs, for example, says “No, the group being led by a foreigner is not a problem. Taiwanese are rather shortsighted, care more about their own health, children's academic performance and money. There is a degree of selfishness in our society.

“Having said that,” Cheng quickly adds, “I see hope in Taiwan’s younger generation.”

In fact, she suggests having more not less English at XR events. “The challenge is to make them more relevant. I’m thinking that environmental actions where people can study English at the same time might be popular given how much young Taiwanese want to practice English with a native speaker.”

Ironically, it was language issues that led Maler to start the XR Taiwan chapter. “I originally just wanted to join another organization in Taiwan. I went to a Greenpeace action and asked them if I could join their team and help anyway I can. At the time, I couldn’t speak enough Chinese and they said that because of that there wasn’t a way I could join. Turns out, once I started working with Greenpeace through XR, this actually wasn’t a problem.

“I chose to start an XR chapter because I thought what they were doing was creating more change and was more effective in gaining attention than other environmental groups. I even wished I could be in the UK and help them. Although this was impractical, starting a chapter here wasn’t.

“I would like to make our actions more confrontational, but I am not from Taiwan, and I think foreigners breaking the law would look bad. If it happened in my country, we wouldn’t hear the end of it. When we have more local members and a local national coordinator, the locals can break the law if they want because it is their country, and if any foreigner would like to join in these actions, they will be more than welcome to, but must understand the consequences.”

One such foreigner might be Juliette Forest, a technical writer from Lyon, France, now based in Hsinchu. “At the moment I have the feeling that people are more watching us as an entertainment than a serious activist group. Getting arrested is a statement for me saying: look at me, it matters. I think confrontational actions should have a smart goal, though, and be realistic. For example, getting the Taiwanese government to forbid every single-use plastic. But first we need to raise awareness and gain trust. Trust from other people in what we are doing.”

In the meantime, XR Taiwan has held a silent meditation in Daan Park on Sunday mornings, as well as more high-profile events every few weeks. These have included marches, die-ins and a monthly beach clean-up.

It is these last events at which participation by local people is highest. “Possibly because they are less confrontational,” Maler says ruefully, but perhaps also because people could feel they were actually doing something constructive, Cheng thinks.

Things took a turn for the more dramatic when Irina Lebedeva joined the group in late 2019. Lebedeva from Tomsk in Russia’s Western Siberian works in Taiwan as a science educator for children, but her real passion is for dance and choreography. 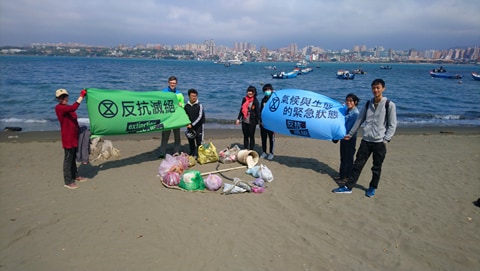 XR Taiwan organises regular beach clean-ups, such as this one in January 2020

Subsequent actions saw the group doing their best to dance to Michael Jackson’s ‘Earth Song’ in the Ximending pedestrian zone in Taipei, dancing and chanting ‘Vote for your future, vote for your children’ in the run up to the ROC presidential election, and performing a flashdance nicknamed ‘Discobedience’ at key city intersections, but as usual making sure not to break the law or annoy car drivers.

Due to the coronavirus crisis, since early March the group has suspended all public events, however, as well as its own weekly planning meetings, which now take place online.

“Actually, there are lessons we should learn from the pandemic,” Lebedeva suggests. “It might open the eyes of millions on the reality of how fast a crisis can unfold, and how much we’re all interconnected and interdependent.”

“Once the health crisis is over we must remember that going back to business as usual is not the correct path to take,” says Maler. “We will still be in a planetary crisis and must continue decreasing emissions and turning to renewable energy sources for the sake of our survival as a species.”

Mark Caltonhill is a Taipei-based translator, writer and occasional rebel

Throughout the globe, Clarins have acted responsibly, at both the individual and collective levels. Due to the unprecedented impact of Covid-19, especially in EU in recent days, Clarins believes that it's a vital time to take social responsibilities as a global citizen.