Has the time come for a Universal Basic Income?

The debate around the need for a Universal Basic Income (UBI) often focuses on the staggering costs involved with such schemes, but as Artificial Intelligence (AI) and robotics make an ever greater impact on labour markets we may have no alternative. 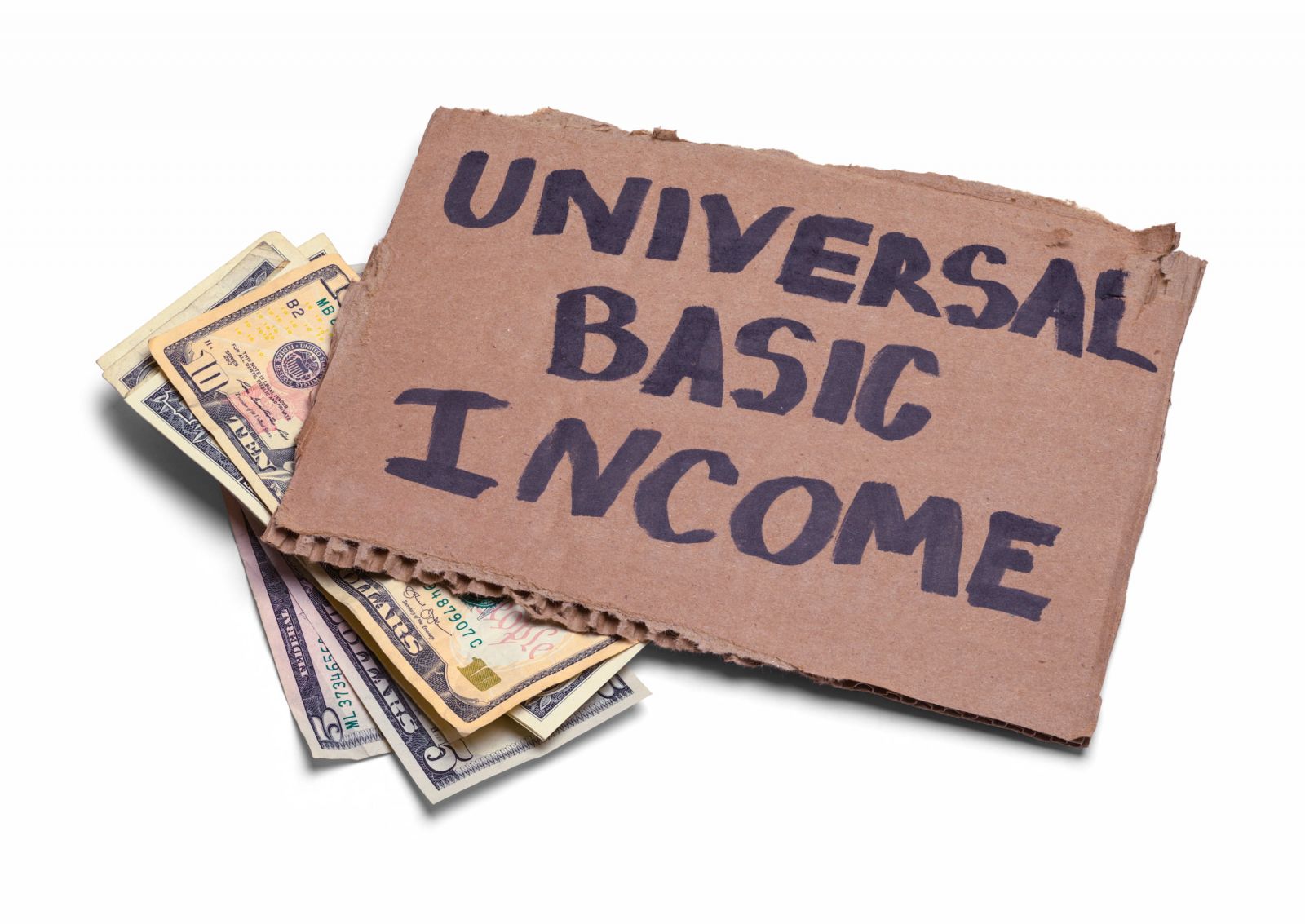 We are often reminded that we live in an era of constant change, and I think most of us would concur. Change can be both exciting and unsettling, but its pace is accelerating rather than remaining constant: "You ain't seen nothing yet!" is about as true as it gets at this point in human history.

When we can foresee some of the consequences of rapid change, even though we don't know the details or the timing, then it makes sense to start thinking seriously about how to plan for them. Universal Basic Income, or UBI, is one of the potential remedies to deal with the effects of change that will be discussed more and more in the future. So far, the debate has focused on the affordability and fairness of UBI, but we now also need to take into account the changing lustre of work and the very nature of work itself.

What is UBI and how does it work?
UBI means that the state will provide a standard, flat "basic" income to all eligible adults on an unconditional basis - no ifs, buts or means tests. It needs to be set at a level that you could live on - this could be some percentage of average gross or take-home pay, for example "x% of median disposable income".

It can be paid as a negative income tax, that is a flat deductible from your taxable income, or as a flat additional payment if you don't earn enough to pay tax. It can be administered through payroll systems for those who are working, or paid in cash for those who aren't.

The cost of UBI is staggering
In a recent article in the UK's Financial Times, the cost of implementing UBI set at one-third of average disposable income was estimated to be about 17% of Gross Domestic Product - a truly staggering amount. However, if you integrate UBI with the tax-free personal allowances that most countries' tax systems provide for, and replace existing flat-rate pensions and social security benefits with UBI, you could reduce the cost to about 5% of GDP - still a huge amount but not totally outside the realms of the possible.

The costs of UBI are indeed a vital element to be considered, and obviously setting the "basic" amount, and integrating it into a country's tax, benefits and pensions systems are key to controlling those costs. But, in the future and as robotics and Artificial Intelligence, or AI, take hold, so might the costs of not having UBI similarly escalate beyond reach.

Is UBI fair?
The main argument against UBI is that it is simply unfair to give to those who have never contributed. The Reagan-Thatcher years set the parameters for the debate about state benefits, "entitlement culture" and "welfare scroungers". Whichever side you were on at the time the arguments were clear: you either believed that social security was a disincentive to work and should be removed/minimised to cover only those who could not work through no fault of their own, or you believed the state was the primary agent for protecting people from the hazards of life. Most governments since then have set their policies somewhere between these two positions, with elections often more about emphasis than dogma. But that debate will soon become irrelevant and almost quaintly nostalgic - what are you going to do if 80% of the workforce is redundant because machines can do what people do at a fraction of the cost and a multiple of the speed?

The lustre of work
Most people of working age today will have been brought up in a culture in which work is placed on a moral pedestal, with "success" defined almost exclusively in terms of our careers and financial reward. Paid employment is a marker of being a valuable, ergo "economically-useful" member of society, with those who are not successful being classed as a drain. How often do we hear politicians telling us how much they care about "hardworking families", the implicit judgement in that being that if you're not busting a gut in your job you don't count?

Many of us are expected always to be in contact with the office via mobile phones or laptops, even when we're at home with the family. That kind of behaviour is not only expected, it is lauded. Yet the Covid-19 pandemic has accelerated our thinking about these attitudes to work - look at the ongoing "mass resignation" of people who have reassessed their priorities during the pandemic, and now define their wellbeing by reference to something other than work. Or look at the experimentation with moving to four-day weeks and the effect that has on productivity. With the growth of AI the pedastalling of work becomes even more questionable.

The future of labour and humans
In his book "21 Lessons for the 21st Century" Yuval Noah Harari talks about the future of humanity through the prisms of AI and bioengineering. The book is thoroughly engrossing and I recommend it to everyone. He believes that currently we are hooked on nostalgic fantasies about returning to the golden age of the past, with reliance on nationalism and religion providing comforting explanations of our role in the world. But he is stark in the clarity of his thinking about the future and how we need to "get real" about it.

He believes that bioengineering will extend from its current principal use - dealing with the negative medical consequences of genetic defects - to humans wanting to use it to "upgrade" their bodies, skills and intellect. Such bioengineering would only be available to those with money, so we could end up splitting humans into two species - the haves and have-nots, the "upgraded" and the "standard". That split will be further exacerbated by AI pushing billions out of the labour market, lowering their earnings and further removing them from access to upgraded bodies and skills.

He is optimistic, at least for liberal democracies, that having survived the challenges of two hot world wars and one cold one we will continue to survive if we know how to reinvent ourselves. But he doesn't shy away from the biggest challenge staring at us now - what will the job market look like 20, 50 or 100 years from now? If AI will mean that machines can do 80% of what we humans do now, there simply won't be enough jobs around to soak up the labour force - 20% of us will be gainfully employed but 80% will be idle. Think through the social dislocation implications of that. What does it mean for human dignity and mental wellbeing? Should we be rethinking our whole approach to the balance between work, leisure and education?

How dramatic is this going to be and when will it happen? Who knows? We probably won't even realise what's going on as it creeps up on us, but one day we'll wake up and realise what's happened, and then it will be too late. We will have a huge underclass of 80% of the population with no means to support themselves. So, wouldn't it be better to start thinking about this now, UBI included?

Many of the arguments in favour of UBI aren't new
For all the criticism levelled at UBI for being "unfair", we don't seem to realise how much we already borrow from the principles of UBI in the world today. We guarantee basic living standards by subsiding people to do the things in life that we all benefit from - education and training so that we have a productive workforce, health care to minimise the time people are absent from work from sickness, and maternity benefits so that we'll have enough children joining the workforce in the future to pay the taxes all this relies on.

The state provides loans for tertiary education so that young people can become even more useful and productive members of society, and companies provide internships and scholarships for master's and PhD programmes because there will be some benefit to the company at the end.

If UBI were directed properly it could be used to fund the re-tooling and re-learning of the whole country that AI will require and soak up large numbers of the economically displaced for re-education, better appreciation of leisure, or whatever the jobs and the economy of the future will bring us.

A stitch in time
The debate about UBI is one that will last well beyond the electoral cycle. Most governments and people already have too much on their plates to think about it, but that isn't going to make the world stop or resolve the problems of the future. The impact of AI and bioengineering aren't emergencies, yet, but it we don't start to debate the issues now then they will become exactly that - emergencies. We will be stuck with massive problems we'll have no idea how to solve. Think "demographics" - Taiwan is already very close to being a "super-aged society" (in which over 20% of its population is over age 65) and it will become an "ultra-aged society" in another 15 years. It will take generations to deal with that properly, as it will to deal with AI and bioengineering.

So let's start now - let's think about UBI as a way of subsidising people to re-train and prepare now, and let's take a long-term view of integrating tax, social security and retirement benefits. This will take decades but it's better to talk about it now and plan for it and implement it gradually rather than facing up to it only when we've got huge unemployment, under-employment and a massive idle underclass on our hands.

Lee Faulkner is a Fellow of the Institute and Faculty of Actuaries, the UK's actuarial body, and has more than 30 years' experience in the world of financial services in Asia, Europe and Latin America. He is a Taiwan Gold Card holder and now lives in Taipei.