Gruelling cycling events bring international athletes to Taiwan - or did, until Covid-19 knocked everything askew 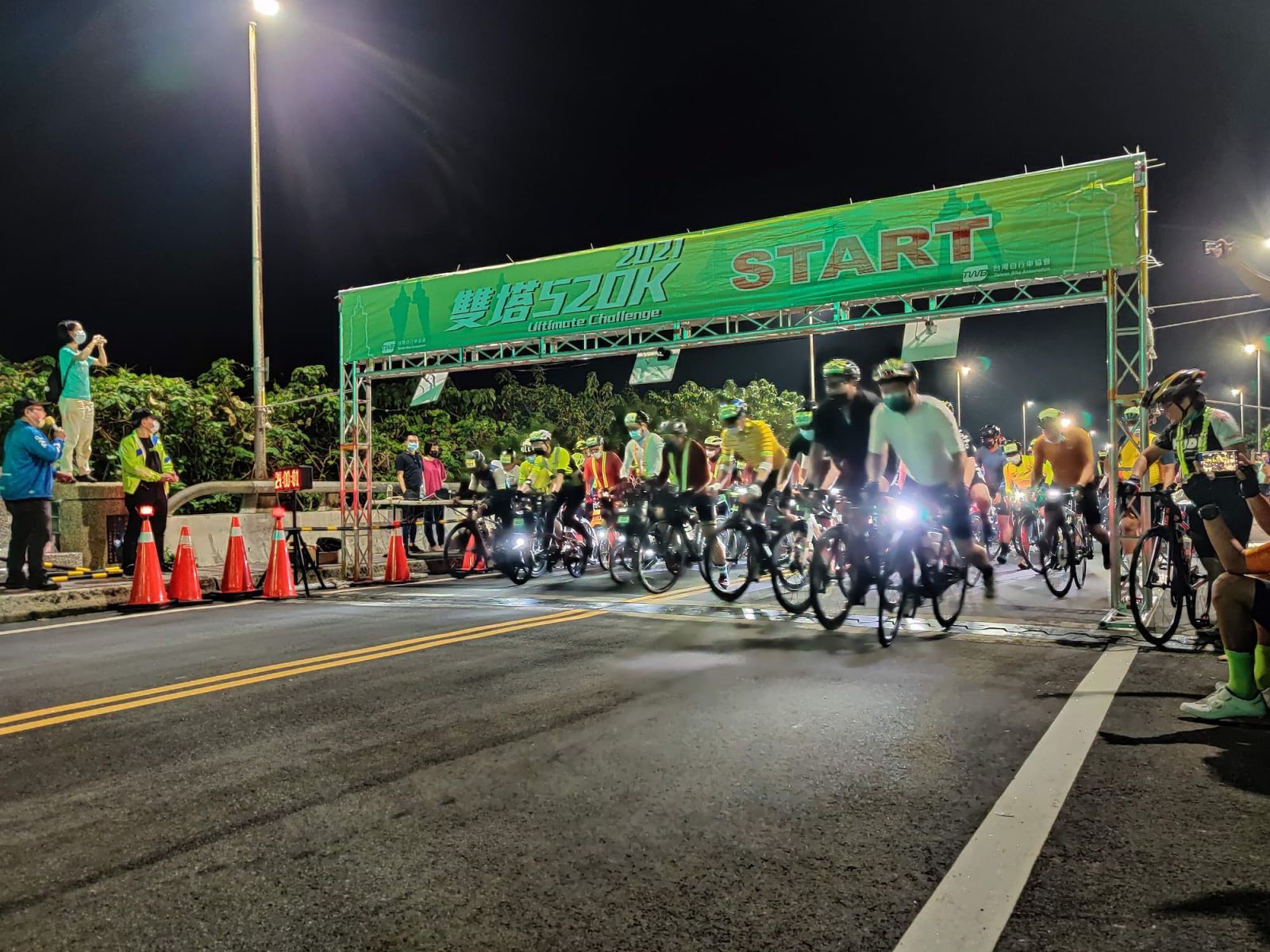 As Friday becomes Saturday, it's time to go.

In the face of China’s threats to assimilate Taiwan (under its misappellation of “reunification”), its increasing sabre-rattling, and its attempts to stifle Taiwan’s space on the international stage, the people of the Republic of China (ROC) on Taiwan have to be imaginative in finding a range of opportunities to avail of so-called soft power initiatives, that is, of cultural and mutually beneficial economic activities that not only raise the nation’s profile but also engender international bonhomie.

Whether inviting cyclists from around the world to undertake the challenge of riding from Taiwan’s northernmost tip the more than 500 kilometres to its southernmost point within 24 hours can possibly be called “soft” anything is a moot point, but this is exactly what has been happening since 2014.

Thus, hundreds of cyclists, a great many wearing the yellow shirts with “520” logo provided by the sponsors, set off from Fuguijiao Lighthouse (富貴角燈塔) at midnight last Friday, the first weekend in November, the usual date on which it is held. That this was significantly fewer than the several thousand in pre-pandemic years is, the organizing Taiwan Bike Association (台灣自行車協會) admits, at least partly due to the government’s current Covid restrictions, meaning that overseas visitors are not permitted to enter the country. It was, however, a foreign cyclist, albeit one locally based, who was the first to arrive at Eluanbi Lighthouse (鵝鑾鼻燈塔) 16 hours and 42 minutes later on Saturday afternoon.

That this prize-free event more-or-less rounds off Taiwan’s season of cycling events that kicks off each spring with the third-tier International Cycling Union (UCI) professional Tour de Taiwan is no coincidence, as the strong seasonal north-easterly winds generally pick up around the end of October, thus greatly assisting most cyclists achieve what would otherwise be a near-impossible one-day distance. 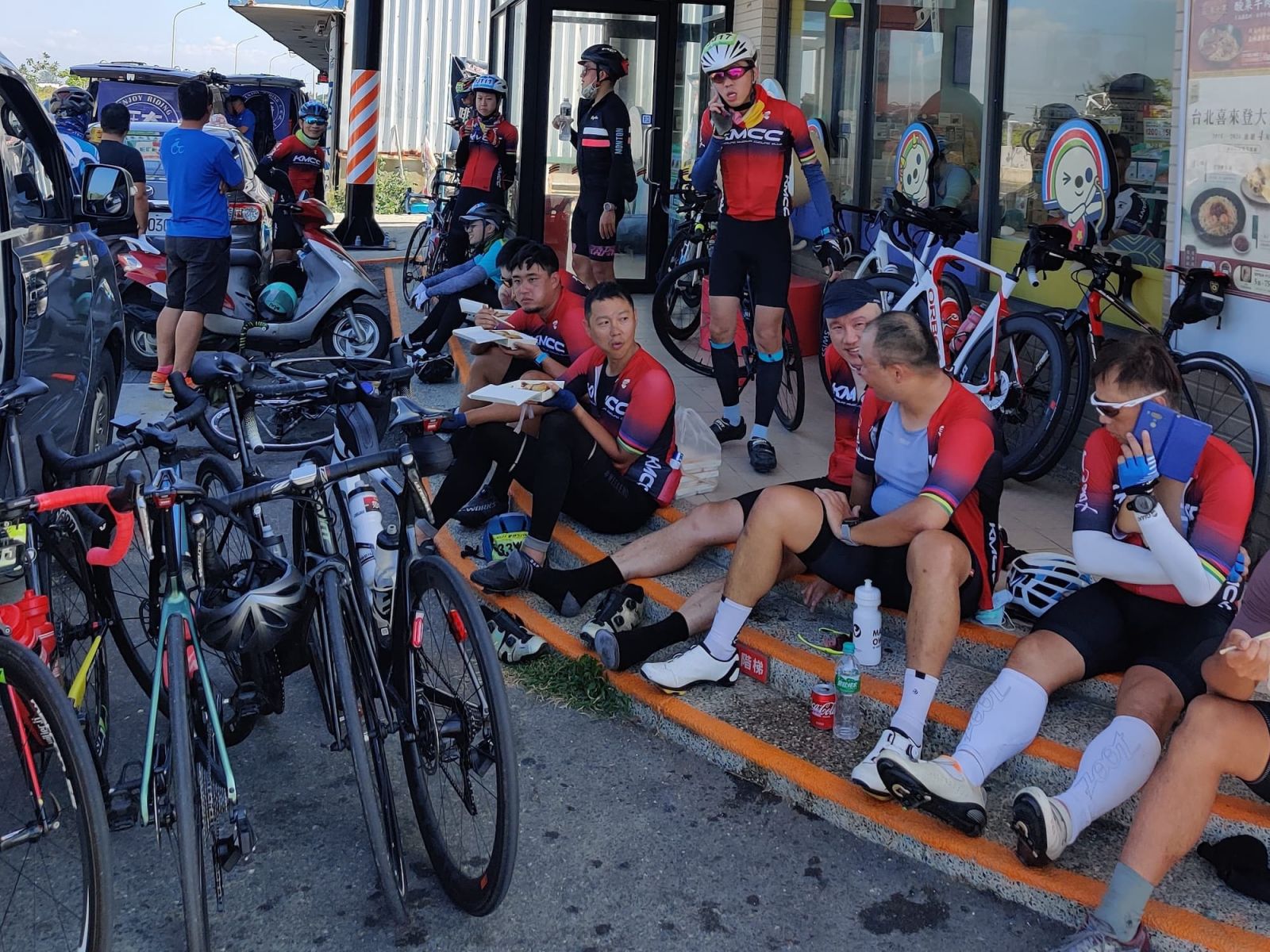 Almost midday and 300km ridden, lunchtime for a team in Budai

Indeed, what started as little more than a rumour and a dare in an online all-things-bike-themed chatroom in the late noughties has developed into one of the must-do, coming-of-age events popular among Taiwan’s burgeoning cycling community, along with the 1,060-kilometre Huan-dao (環島; round-island ride) and 105-kilometre-long, 3,250-metre ascent from the seashore at Hualien to Taiwan’s highest public road at Wuling (武嶺) Pass, known as the KOM (King of Mountains).

And, as word of these events spread, all three became key reasons for cyclists from throughout East Asia and beyond to visit Taiwan. The KOM, for example, has attracted at least two Tour de France champions: Australian Cadel Evans who rode in 2016 and described participating as like being in “a scene out of a movie”, though he found the “fatigue and the altitude to be the biggest challenges”, after all, the Tour de France has never been higher than 2,802 metres above sea level. Italian rider Vincenzo Nibali, who won the 2017 edition of the KOM, said it had been the longest and hardest climb of his entire life.

With this race taking place on the last weekend in October, it means that truly hard practitioners of soft power can participate in two contrasting events in consecutive weeks: the first, one of the hardest climbs in the world, the second, one of the longest, backside-numbing hauls imaginable.

Both attract top-tier athletes, but both are also open to anyone to attempt (though cyclists failing to make cut-off times in the KOM will be asked to ride out the final stages in the “broom wagon” that mops up the rear). No such restrictions apply to the Yi Ri Shuang Ta (一日雙塔; “one day, two lighthouses”) event, though only those besting 30 hours are given an official finishing time. A great many do not finish at all, but willingly take any lift offered them or peel off at one of the TRA or HSR stations along the way.

Unlike the KOM, for this there is no prize money, but real kudos is attached to crossing the line first or registering a fast time. For most of the two to three thousand participants that attempt it in normal years, just to finish is a major achievement, one that many say they will never do again.

Indeed, many treat it as a sort of holiday outing (one person even took her dog in the basket on the front of her bike this year), stopping to visit tourist attractions along the route, pose for souvenir photos and, this being Taiwan, sample the local culinary specialities along the way, from fish balls and agei (阿給; a kind of stuffed tofu) in Danshui, to Hsinchu’s rice noodles and Miaoli’s Hakka stir-fried intestines, Changhua’s ba-wan (肉圓; sweet-potato-flour doughballs stuffed with pork), Chiayi’s oysters, Tainan’s coffin bread (棺材板), Kaohsiung’s papaya milk shake, and goodness knows what else.

There are two main approaches to participating in this event: assisted and unassisted. For the latter, individuals or small groups carry everything they need with them on their bikes or in rucksacks (or, for NT$60, send parcels of supplies and dry clothing to pick up at convenience stores along the way and, most commonly, from the 7-Eleven that is conveniently located opposite the finish-line carpark), and buying food and drink as they go, most often also from convenience stores. 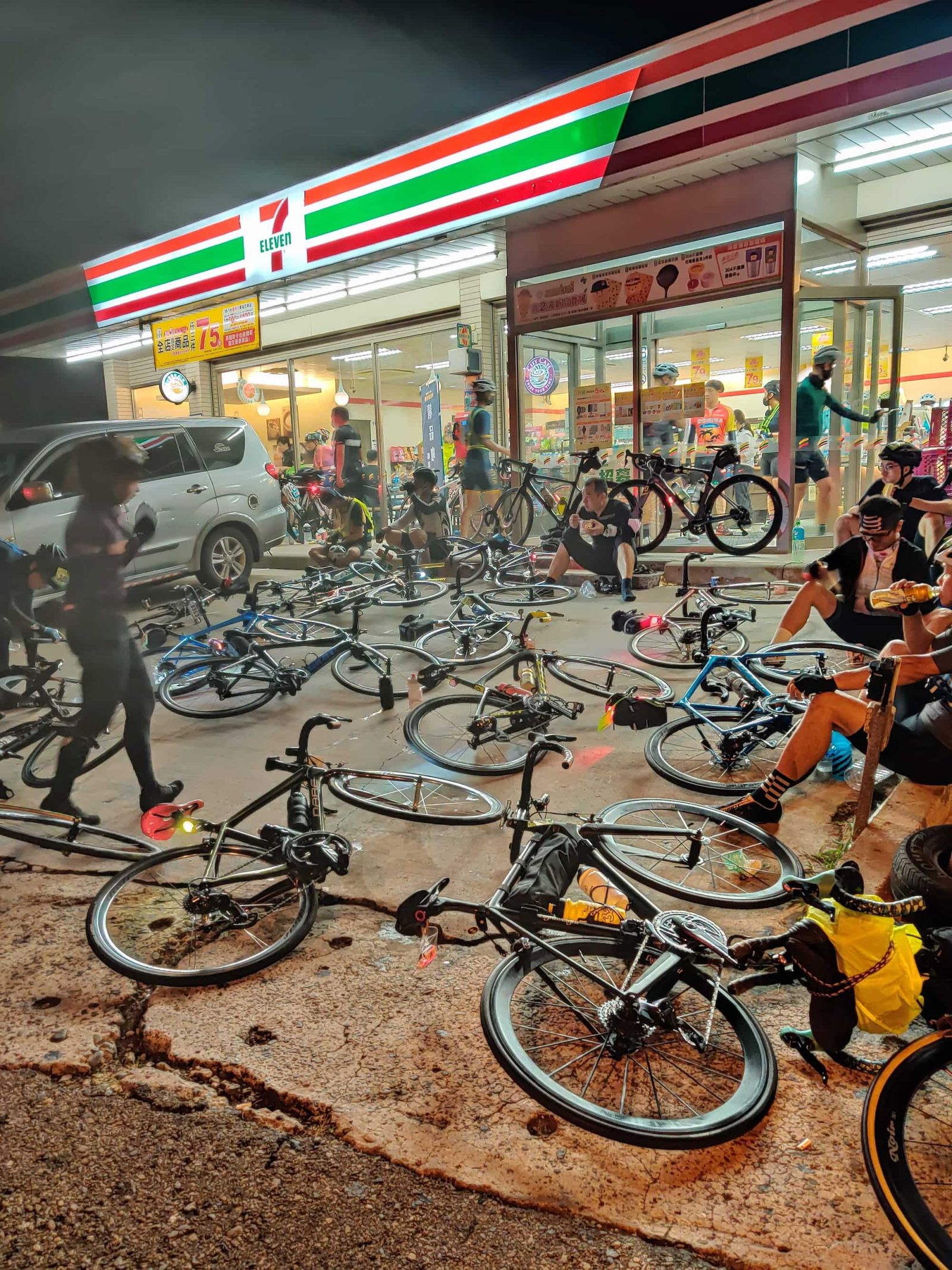 Most convenience stores along the 510-kilometre route are inundated with thirsty and hungry cyclists.

The majority, however, do things in more luxury, hiring a van and driver/mechanic to accompany them along the route and then drive them home the following day. These vehicles tend to stop every 50 kilometres or so to dish out water, isotonic drinks, energy bars and, indeed, complete meals to groups, usually of eight riders. These tend to be ad hoc teams of friends or friends-of-friends who have banded together for this once-in-a-lifetime challenge, and often they all wear the same cycling jerseys specially designed to celebrate this one-off occasion.

In this way, events such as this have spawned a whole new industry for many of the innumerable bike shops that proliferated over the past decade as cycling became a popular hobby in Taiwan. Given that most cyclists will only buy one bike, at least for the first several years, shops have had to expand into other services. Athletes new to cycling often lack confidence in their technical abilities, however, so knowing that a qualified mechanic is on hand, not to mention a constant supply of nutrition and even a mobile seat to take a rest if the challenge was simply a little too much, guarantees peace of mind.

Other bike shops, such as 96 Cycling (96自轉車) in Taipei, and bike manufacturers, have joined traditional cycling federations in organising races and mass-participation activities. Thus, while the KOM and a season of races are organised by the Taiwan Cyclist Federation (中華民國自行車騎士協會), and the lighthouse-to-lighthouse event was held by the Taiwan Bike Association, the latter was co-created by Giant, the world’s number one producer of bicycles (which also initiated the prestigious Tour de Taiwan as long ago as 1978) along with Taipei Mayor Ko Wen-je (柯文哲), who also rode in the inaugural 2014 edition, finishing in a creditable 28 hours and 30 minutes. 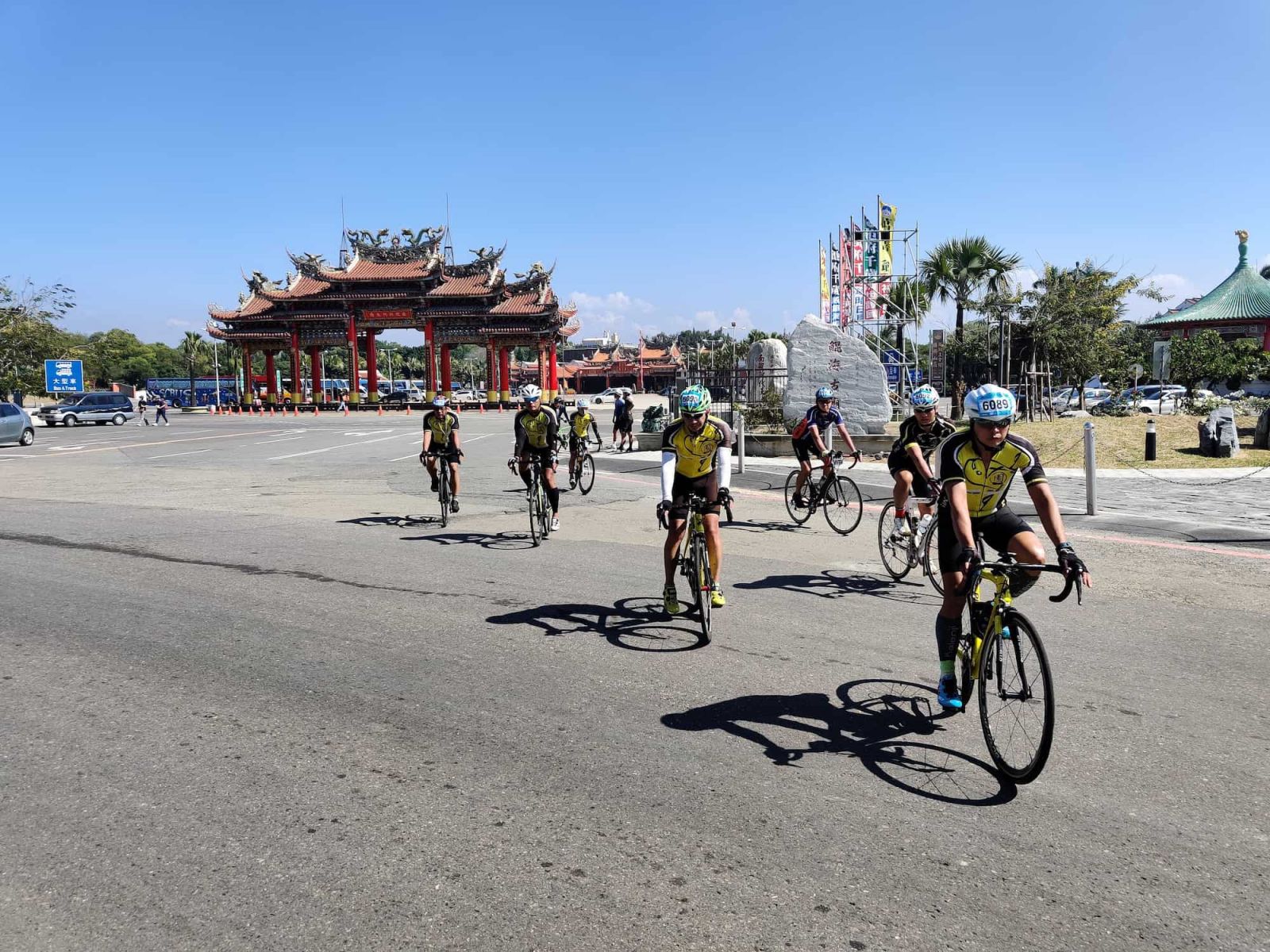 The route is not the most attractive, it has to be admitted, running next to or below the West Coast Expressway (Provincial Highway 61) for much of its 300-kilometre length for long periods, which exposes cyclists to a monotony of HGV noise and concrete views. This year due to major road works, however, participants were treated to a number of diversions which, although they may have added on a few kilometres to the usual total of around 510 (the route is branded as 520, possibly because that number sounds like “I love you” in Hoklo Taiwanese), meant that cyclists also rode down country lanes, reminiscent of television footage of the Tour de France racing through fields of wheat and corn. Except here it is rice and rice, as well as the occasionally more rice and rape seed, and then taro fields around Taichung, and fish farm after fish farm in Changhua and Chiayi. There are some wonderful views of Pingtung’s tropical beaches to be enjoyed after Hengchun (恆春), but with sunset falling at 5.16pm, only the first handful of finishers will have got to appreciate them, most notably Ray Sanchez from the Philippines who lives in Taoyuan, the first finisher this year. 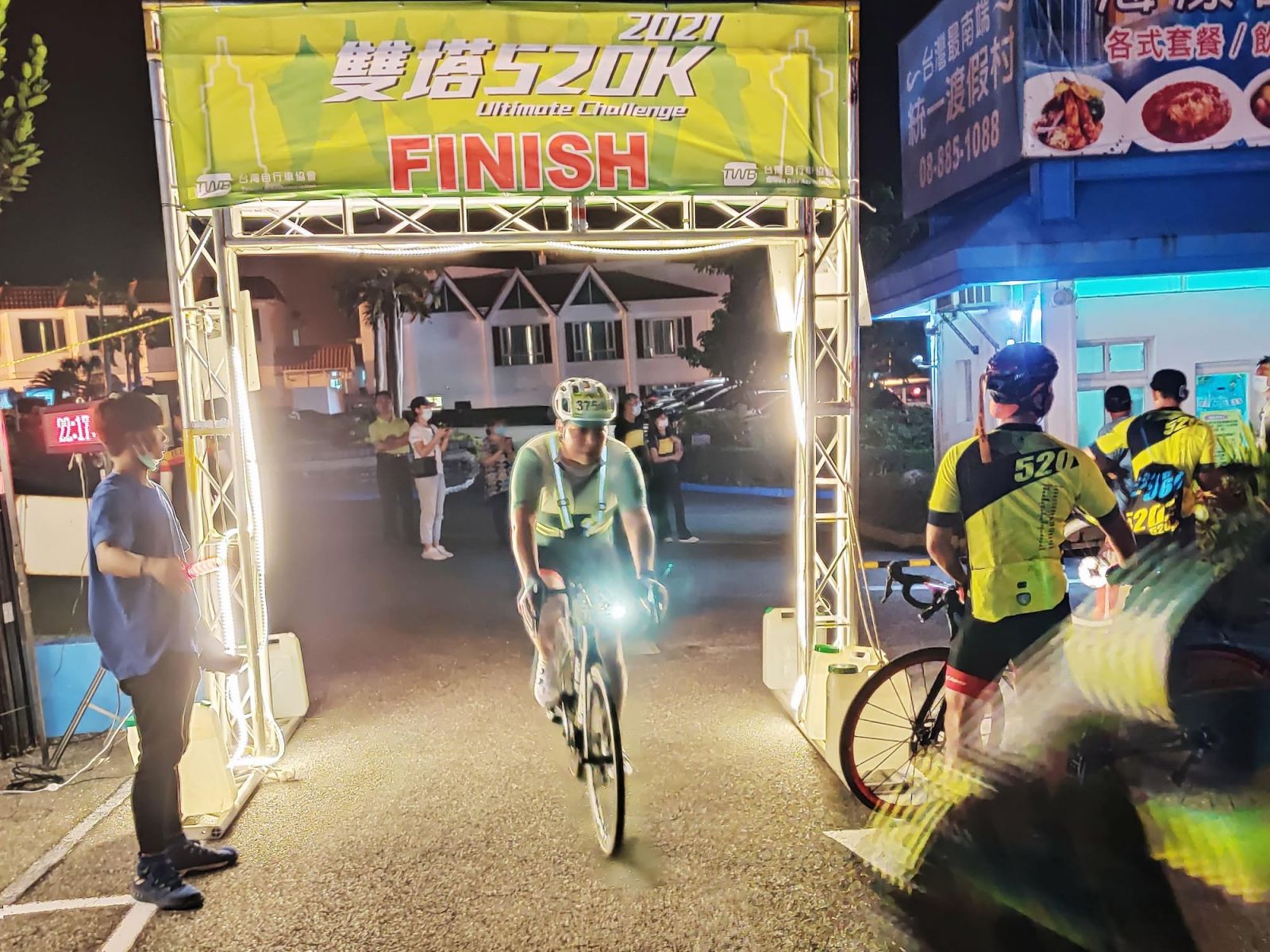 Behind him, cyclists trickled in by ones and twos, cheered on by a growing group of fellow athletes, many enjoying beers on the benches outside the finish-line 7-Eleven. Each successful cyclist then not only joins a select group to have completed what, only a dozen years ago, was a fantasy challenge, but this year, since the north-easterly winds were yet to arrive and the sun shone from mid-morning till dusk, has also participated in a particularly hard edition of this soft power event.

Mark Caltonhill is a Taipei-based British translator and writer