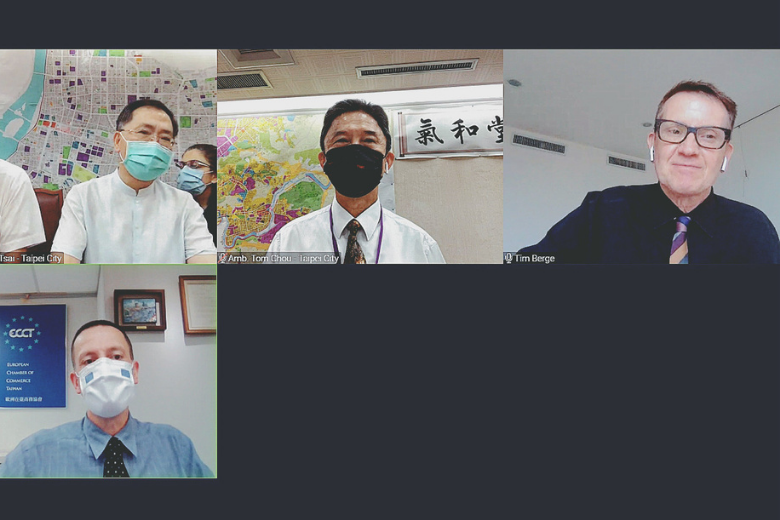 The ECCT, in conjunction with ICRT, hosted a briefing by the Taipei City Government on the latest Covid-19 situation in Taipei. Read the full event report here.

The event, moderated by Tim Berge, Co-chair of the ECCT’s Better Living committee, featured Dr Tsai Ping-kun, Deputy Mayor of the Taipei City Government, Tom Chou, the city’s Commissioner for International Affairs and Dr Syu Jia-jhen, Deputy Superintendent of Taipei City Hospital. During the webinar, guest speakers gave a thorough briefing on the current Covid-19 situation in Taipei City, policies and measures affecting businesses and answered questions from the moderator and posted by ECCT members participating in the webinar.

In his opening remarks Commission Chou said that he is translating information about the pandemic into English on a daily basis, which is posted on the city government’s website here.

On the subject of quarantine hotels, officials said that over 100 hotels with over 7,400 rooms have been designated as official quarantine hotels and the city is continuing to work to increase capacity. The hotels all have professional medical staff available.

On a question about rapid testing stations, the city has set up three such stations in the hardest hit areas while 20 designated hospitals are able to process tests.

As to the distribution of vaccines, the city is following CECC priority guidelines for deciding priority according to the CECC’s list of 10 categories, which start with medical personnel and police.

On a question about people travelling overseas who need a negative test within 48 hours, while capacity is still limited, it is being increased and a rapid test for travelling will be introduced soon.

On a question of financial support, the central government as well as the Taipei City Government plan to announce bail-out programmes this afternoon. This will include support for education, arts and cultural industries. Taipei City’s programme, which will run from May until July, will include delayed payment of tax and rents, tax relief, subsidies and financing assistance.

While officials expressed the hope that the epidemic threat level will not be raised to the highest level (Level 4), they are nevertheless preparing for this eventuality should it occur. If Level 4 is implemented, only industries essential to maintaining life will be allowed to remain open. Officials cited examples of services such as water, electricity and daily essentials but hinted that it is not clear if the central government may decide that sectors like the semiconductor industry would also be designated as essential and allowed to continue to operate.