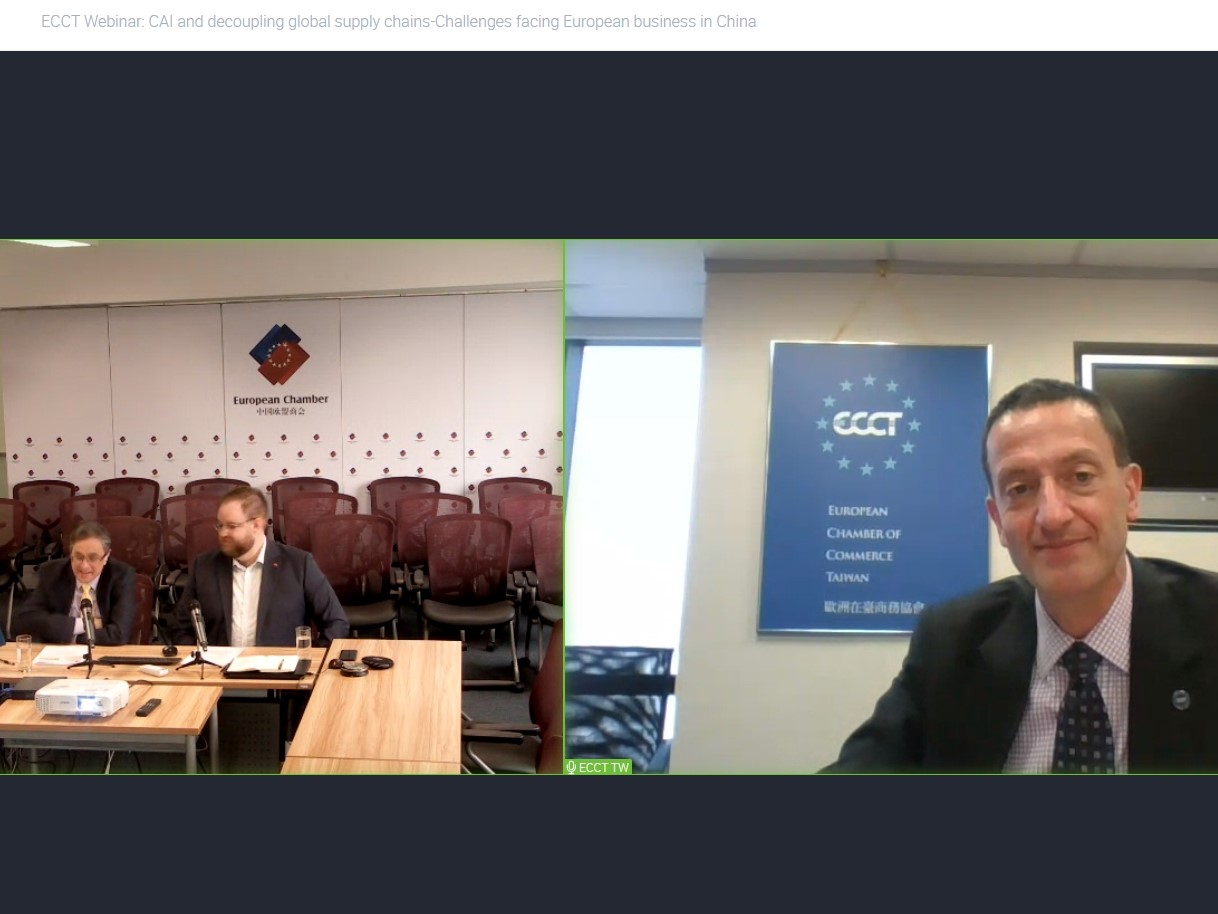 The ECCT arranged a webinar on the topic of the EU-China Comprehensive Agreement on Investment (CAI), decoupling global supply chains and the challenges facing European business in China. Read the full event report here.

At the event, the guest speakers gave an overview of a report produced by the EUCCC and the Mercator Institute for China Studies (MERICS) titled “Decoupling: Severed Ties and Patchwork Globalisation”. The report examines the expected benefits and limitations of the CAI and gives views on how European companies operating in China will work to navigate the ongoing US-China trade tensions and increase the resilience of their supply chains globally.

EU trade representatives have said that the CAI will improve access in sectors like automotive, financial services, real estate, rental and leasing, and addresses issues such as labour rights, forced technology transfers and unfair competition, especially from Chinese state-owned enterprises. However, the decoupling report cautions that some crucial and structural issues are not addressed in the CAI, such as domestic procurement rules that discriminate against foreign investors or restrictions on cross border data flows. In addition, with regards to human rights and labour issues, the report says that China has so far only committed to “working towards” ratifying the missing International Labour Organization (ILO) conventions in the CAI. Besides the domestic structural issues, European businesses in China are concerned about being caught in the crossfire of US-China trade tensions and being forced to have to choose between doing business with China or the US and its allies.

According to the speakers, very few companies are thinking about leaving China altogether, but many are increasingly concerned about the growing complications and costs involved in doing business in China.

Competing data compliance regulations has created a challenge for global data systems, even for sectors not dealing with sensitive personal data. For example, companies involved in developing autonomous vehicles rely on a global database of tests from multiple locations and conditions in order to improve machine learning and algorithms to make autonomous driving safer and more efficient. If they are restricted by national data protection rules from sharing and analysing data on a global basis, their progress will be limited or at least slowed down. In addition, not being able to share information and consolidate data systems in fewer locations means having to invest much more to replicate the same systems in multiple countries, which raises the costs of IT systems.

It is hoped that the CAI will create an environment which makes investing easier but individual companies will have to consider whether it is worth increasing their bets in China or giving up the market.