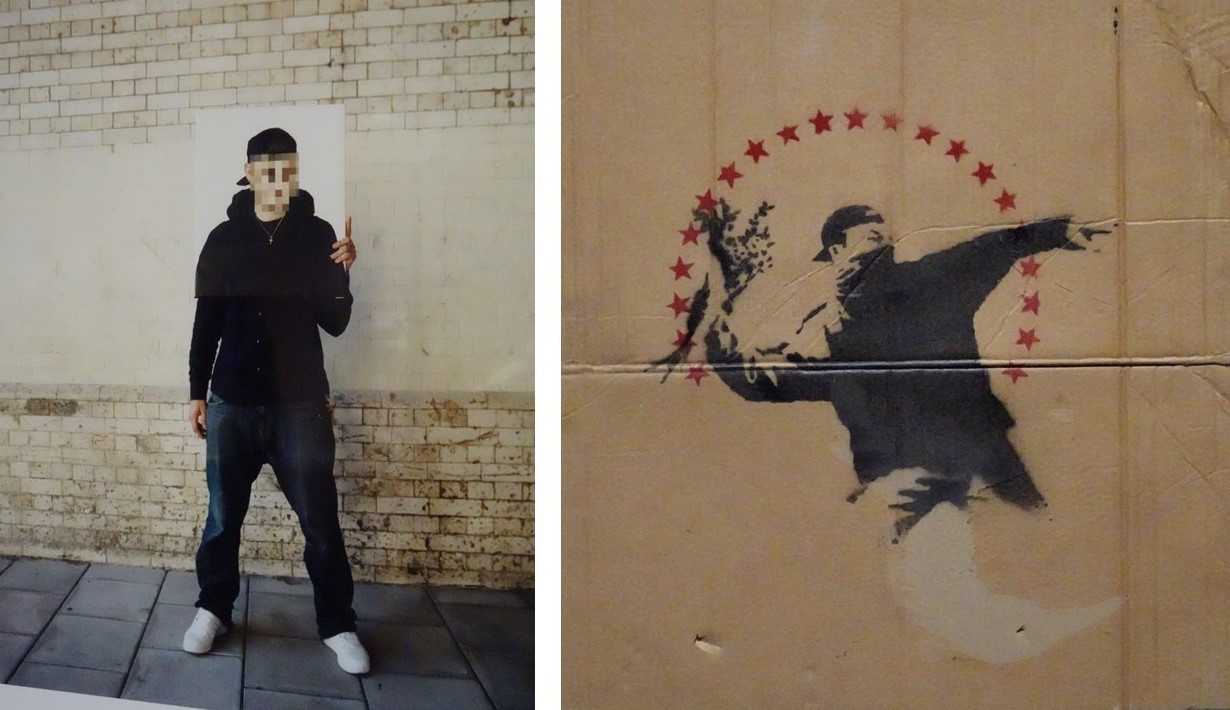 “I like to think I have the guts to stand up anonymously in a western democracy and call for things no-one else believes in – like peace and justice and freedom.”

An exhibition of Banksy’s work in the Chiang Kai-Shek Memorial Hall? There’s a delicious irony in the juxtaposition of these two people who could hardly be further apart in terms of character, personality, and public profile. Mind you, Banksy would doubtless do something special with those massive white walls of the Memorial. A blank canvas he’d surely find impossible to resist!

The “I Love Banksy” exhibition is open until 5 April, the second time his works have been on display in Taipei. The first time was two years ago, when 25 items were shown in a small gallery, but the latest show is larger and presents much more of an exploration of what Banksy is saying through his art, leading the viewer through many different aspects of Banksy’s career – his use of different motifs, such as the chimpanzee and the rat, his championing of the poor and disenfranchised, his scathing attacks on the political establishment and the misery and destruction its forces bring down, his railing against consumerism and the exploitation of society by big business, his despisal of the elitism of the traditional art world and the mystique of his jealously guarded anonymity. And there are even glimmers of humanity and optimism.

There are 60 different works, a mix of photos of his street creations in situ, original posters sourced from collections around the world, reproductions and original pieces adapted for use as album covers, posters etc. Lots of thought has gone into the layout, with different areas given over to different themes and all credit to the organisers for providing detailed and what I found to be informative commentary in both Chinese and English on all the works. Much of the information around each piece goes into explaining why such a piece might be necessary in the first place, meaning the context and background. This is not a random collection of artworks, but more a biography of the artist, using his output to illustrate different facets of his career and, by extension, giving voice to his messages. Some might disagree with the interpretations offered by the writer(s), but I do applaud the fact that they have taken a stance and the exhibition is all the more thought-provoking as a result. 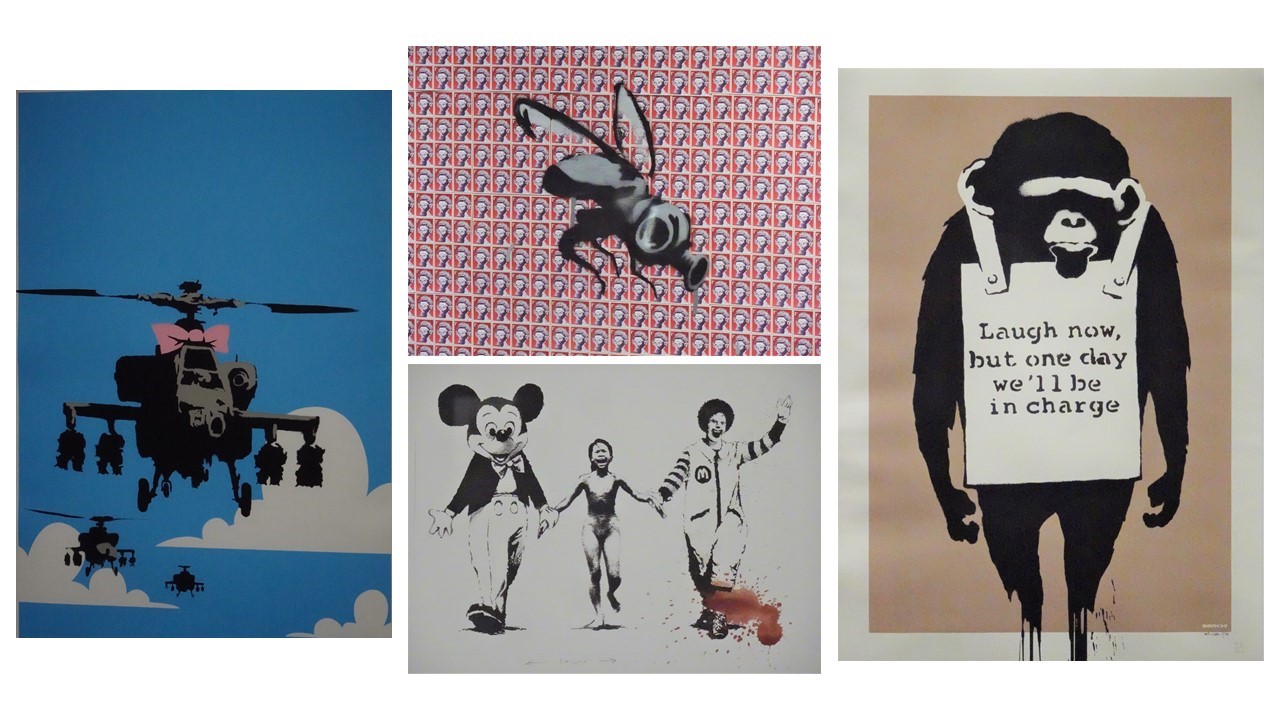 Street art: from vandalism to respectability

There is hardly an urban landscape anywhere in the world today (including cities across Taiwan) that doesn’t offer some examples of street art, ranging from basic text graffiti to colourful, sophisticated, highly skilled visual artworks.

Slogans of protest and political or social commentary graffiti on walls are the precursor to modern graffiti and street art, dating back to New York City's graffiti boom in the 1960s. Over the next two decades, a shift occurred from text-based works to visually conceptual street art. Nowadays much street art continues to be used (including by Banksy) as a way to raise awareness of social and political issues, often within the immediate community, but also addressing global issues. Many other artists use urban space as an opportunity to display personal artwork to a wider audience than would be reached through traditional galleries.

The popularity of street art is relatively recent. In the early days, graffiti was generally regarded simply as vandalism and even now most public spaces are officially off limits (just imagine the official reaction if Banksy did get his hands on the walls of the CKS Memorial Hall!) However, street art has undergone a major transformation in public opinion to become socially accepted and respected in some public places, with at least part of the appeal being down to the fact that the medium for these pieces is the street.

In Banksy’s own words:

"Bus stops are far more interesting and useful places to have art than in museums. Graffiti has more chance of meaning something or changing stuff than anything indoors. Graffiti has been used to start revolutions, stop wars, and generally is the voice of people who aren't listened to. Graffiti is one of those few tools you have if you have almost nothing. And even if you don't come up with a picture to cure world poverty you can make somebody smile while they're having a piss."

Banksy’s rise to the top

Banksy is now 45 and an established icon of the art world, but he began his career back in the early 1990s as a rebellious teenager in Bristol, in south west England, growing up within the underground art scene which encompassed indie music as well as graffiti art.

He started out with freehand graffiti, as part of the DryBreadZ Crew, but soon switched to his now distinctive stencil style, partly to speed up his creative production. When he was 18, his gang was painting a train when the British Transport Police showed up and everyone ran. “My mates made it to the car,” Banksy recalled, “and disappeared so I spent over an hour hidden under a dumper truck with engine oil leaking all over me. As I lay there listening to the cops, I realised I had to cut my painting time in half or give it up altogether. I was staring straight up at the stencilled plate on the fuel tank when I realised, I could just copy that style.”

From those early beginnings, illegally “bombing” sites in Bristol, his works of political and social commentary have appeared on streets, walls, and bridges throughout the world. One of the first displays that greets visitors to “I Love Banksy” is a map of his now global reach, covering multiple locations in the UK, France, Italy, Africa, Japan, Australia, Canada, Jamaica, and the US.

In addition, a visit to Palestine in 2005 had a profound impact and he has created a number of particularly memorable pieces there, highlighting the plight of the Palestinians, including the Masked Thug Throwing Flowers, the Girl Frisking A Soldier, the Armoured Dove, and a number of panels on the Separation Wall.

More recently he has opened the Walled Off Hotel in Bethlehem, part of which is recreated in the CKS exhibition. It is a hotel, museum, protest, and gallery all in one, packed with the artworks and angry brilliance of its owner, according to The Guardian.

From the lavish presidential suite where water splashes from a bullet-strafed tank into the hot tub, to the bunk beds in the budget room scavenged from an abandoned army barracks, the hotel is playful and strongly political.

All the rooms look out on to the concrete slabs of the wall and some have views over it to pill boxes and an Israeli settlement on the hillside beyond.

Such is Banksy’s fame now that, rather to his dismay, his creations command astronomical prices in the world’s leading auction rooms. In 2007, Sotheby's auctioned several of his works for then record prices. On the second day, Banksy posted a new image on his website of an auction house scene showing people bidding on a picture that said, "I Can't Believe You Morons Actually Buy This Shit."

Idealism versus the Banksy Brand

As commercial success has increasingly come Banksy’s way, it is pertinent to ask the question, “has he sold out?” Certainly, the obsessive preservation of his anonymity has fuelled the hype and contributed significantly to the mystique that surrounds him. Similarly, the tight control of “Brand Banksy” and of the sale of his works has generated huge demand for original pieces. Despite his firm anti-authoritarian, anti-capitalist stance, it is generally believed that Banksy is well provided for financially.

On the other hand, as so much of his work is on walls, he does not benefit from any sales of the walls or the buildings they are part of. He has been able to make money by selling prints, which often featured the same dramatic images he previously painted on city walls and the whole process is extremely tightly controlled, with sales held back from art dealers.

In 2008 he set up Pest Control, an agency to authenticate works and prevent fakes and site-specific street pieces from appearing on the market. Reputable dealers and auction houses now sell Banksy works only with Pest Control certification and it is the only point of sale for his new work when it is available. New releases are extremely rare, so much so that there may be only 30,000 authentic Banksy prints in existence, giving them a rarity value that forces prices ever higher and enriching the secondary market of dealers and auction houses, rather than the artist. Banksy himself commented wryly when his painting “Devolved Parliament” sold for over US$12 million: “Record price for a Banksy painting set at auction tonight. Shame I didn’t still own it.”

Nevertheless, according to some commentators, Banksy may have come to a point where the strength of his brand and his commercial success make it increasingly difficult for him to remain rooted in the radical subculture that spawned him.

His actions, though, would suggest that the anti-establishment fire still burns strongly.

In Bristol he supported protests against a new supermarket by producing a £5 “commemorative souvenir poster” of a “Tesco Value Petrol Bomb,” to raise funds for the campaign.

In Central Park in New York, he sold original paintings for US$60 from a vendor stand.

In 2017, he offered low-cost prints through a tightly controlled online lottery and donated three paintings to raise money for a hospital in Bethlehem.

In response to the global Coronavirus pandemic, Banksy hung a new artwork, depicting a young boy playing with a ‘superhero’ NHS nurse doll, in a UK hospital, thanking the NHS for their work.

These are just a few examples. There are plenty more.

Final thoughts on “I Love Banksy”

Along with his contemporaries, Banksy is credited with transforming graffiti from the typical “bubble writing” style of the 1980s to the “narrative-driven street art” of today and his accession to the very pinnacle of the art world has legitimised graffiti as a viable form of public art.

Here in Taiwan, the active encouragement of street art by municipal authorities across the island has led to the emergence of a vibrant community of local and foreign street artists. Against this backdrop, it is fascinating to have the chance to learn about and admire first-hand the work of one of the pioneers and driving forces of the global movement.

As you can tell, I’m a fan. Not everyone is, but the exhibition gives us in Taiwan an opportunity to decide for ourselves where we stand. As ever, Banksy himself puts it best: 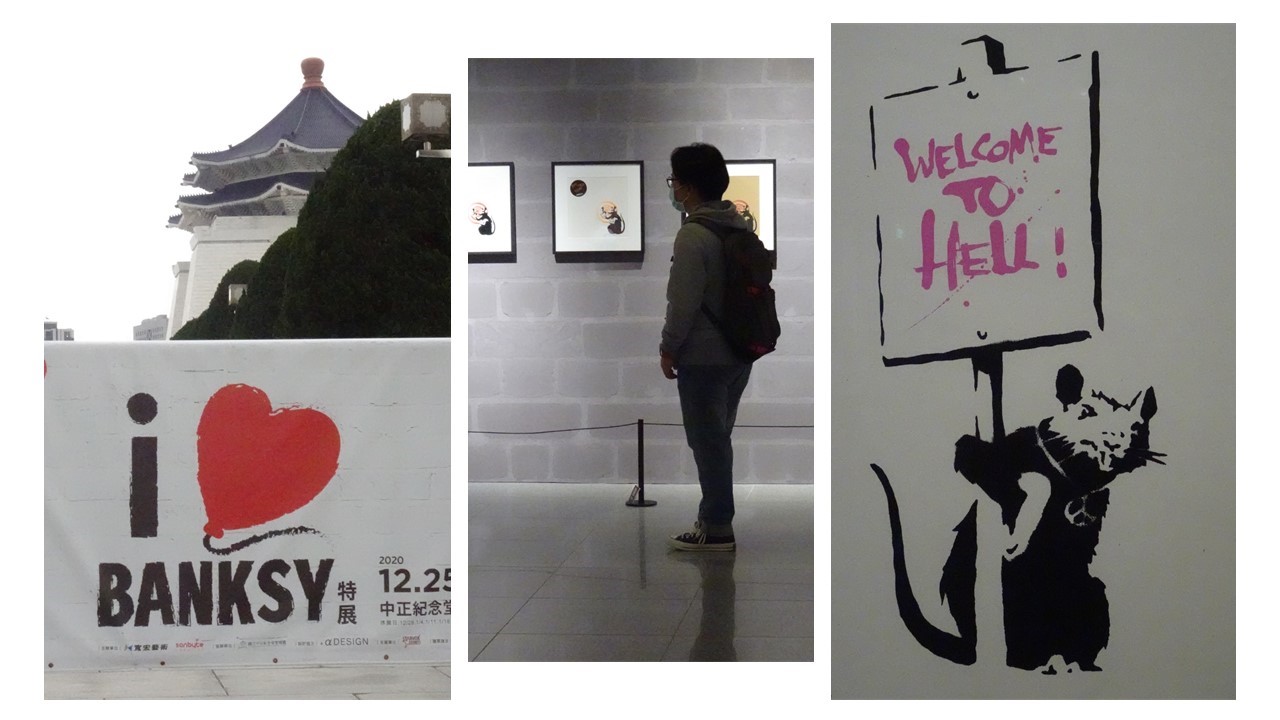