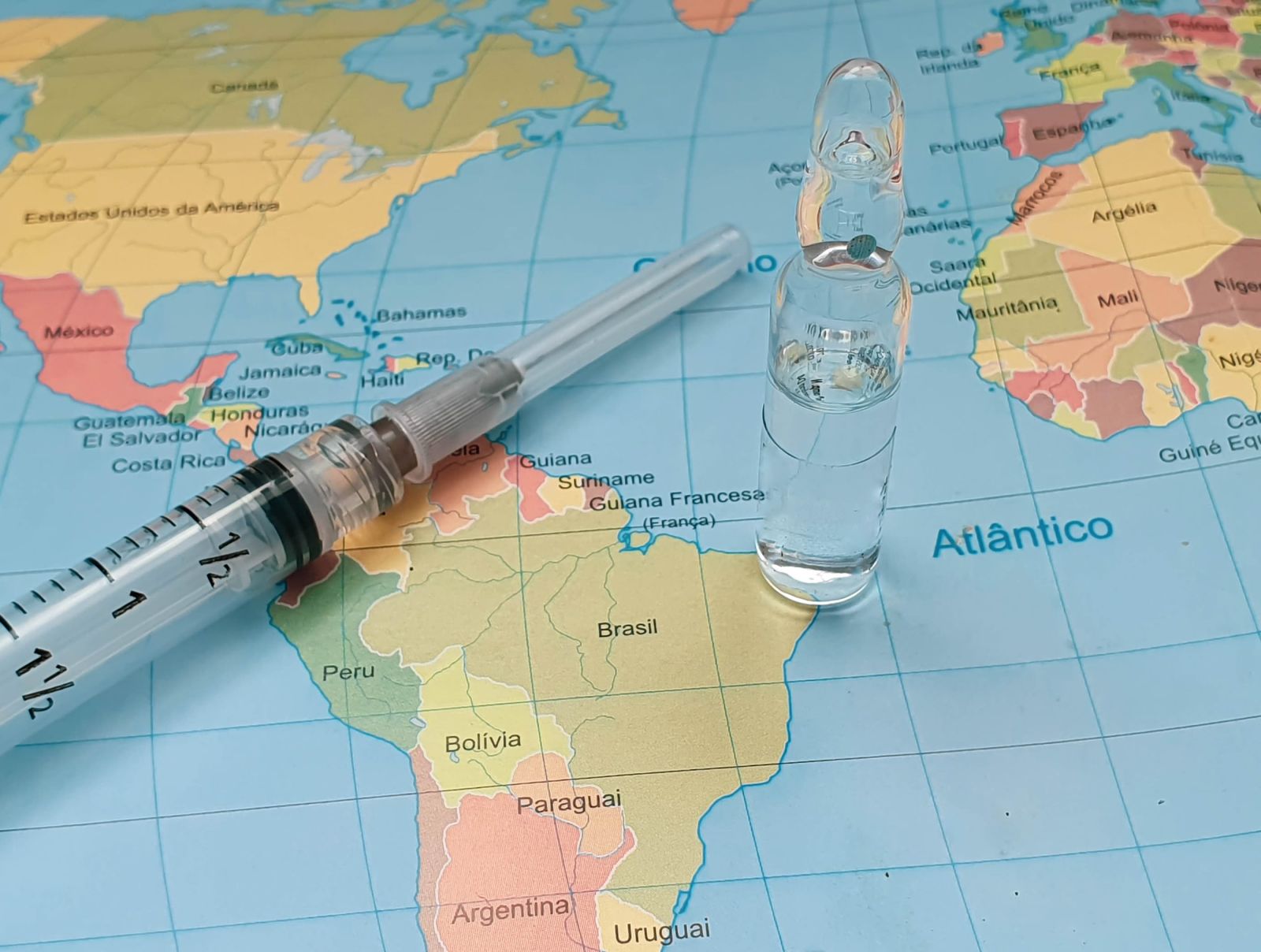 Vaccine nationalism has proven to be one of the more unusual phenomena caused by Covid-19. In particular, the race to develop a vaccine for Covid-19 saw countries seeking to compete for the prestige of being the first to develop an effective vaccine.

In a time that has been termed the new cold war between the United States and China, some have compared this to the space race during the first cold war, in which the US and Soviet Union raced to see who would be first to achieve the goal of landing a man on the moon.  There was no clearer example of this parallel than Russia naming its Covid-19 vaccine “Sputnik,” after the first artificial earth satellite that was launched into space by the Soviet Union on 4 October 1957.

Given the uneven distribution of resources internationally, it could generally be expected that it would be a large, powerful country that developed the first effective Covid-19 vaccine. Though the odds were stacked against Taiwan, Taiwanese scientists also threw their hat into the ring to develop domestic vaccines—even if unlikely to succeed, this added to an increased focus on Taiwan at a time in which Taiwan’s successes fighting Covid-19 were praised internationally, and could have benefits down the line, if Covid-19 continues to remain with us for years.

However, to an extent, with the world increasingly divided into geopolitical blocs, the choice of which vaccines a country went with could be used to signal allegiances. This took place even during the testing phases of Covid-19 vaccines. An example of this was Filipino president Rodrigo Duterte stating that he was willing to personally serve as a test subject for Russia’s “Sputnik” vaccine. Though, in the end, Duterte did not follow through on this promise, Duterte was, in some way, asserting political faith in Russia by stating that he felt a Russia-developed experimental vaccine was safe enough to take personally.

It may not be surprising, then, that after the eventual development of Covid-19 vaccines by US or UK companies—the most prominent being the AstraZeneca, Moderna, and Pfizer vaccines—this has led to disinformation circulated by the Chinese government aimed at making it appear as if these vaccines were unsafe. Such disinformation also attempted to make Chinese vaccines appear more effective than western vaccines, seeing as Chinese-produced vaccines so far have demonstrated a lower rate of effectiveness than their western counterparts. Through such disinformation efforts, China would be targeting the international prestige of western nations.

Vaccine nationalism between the Pan-Blue and Pan-Green camps
Issues regarding vaccine nationalism are particularly salient in the Taiwanese context, then. Taiwan is, after all, a nation with contested identity issues between the historically independence-leaning Democratic Progressive Party (DPP) and historically unification-leaning Kuomintang (KMT), of which the former culturally identifies with Taiwan and the latter identifies with China.

The origins of Covid-19—seeing as the virus originated in China—have shown how even a global pandemic would become politicized in Taiwan along the lines of unification versus independence identity politics.

The term “Wuhan virus,” originally used to refer to Covid-19 in many parts of the world, eventually came to be criticized as stigmatizing individuals from China, contributing to racism against Chinese. However, because of its pro-independence views, the DPP was reluctant to back away from the use of the term.

Continued use of the term would serve as a reminder to Taiwanese that the origins of the global pandemic were from China. It was likely also hoped that this would contribute to negative views of China, perpetuating the view that the effects of the pandemic could have been reduced if the Chinese government had not initially tried to cover up the scale of the pandemic and silence “whistleblowers” such as Chinese doctor Li Wen-liang.

Indeed, because of international backlash against China for being the original source of the Covid-19 pandemic, the Chinese government has sought to circulate disinformation claiming that the pandemic did not, in fact, originate in China. Given that the Chinese government’s primary geopolitical antagonist is the US, this has led to Chinese disinformation claiming that Covid-19 originated in the US—though to be sure, many claims from the US and other western countries suggesting that Covid-19 has its origins in a lab accident are themselves highly conspiratorial and speculative.

By contrast, the KMT came to embrace the criticisms of the term “Wuhan virus”. The KMT has traditionally tried to depict itself as a party that stood up for the rights of the minority of Chinese residents of Taiwan, particularly Chinese spouses of Taiwanese. China later declared that it would deny entry to Taiwanese whose medical reports referred to the term “Wuhan virus.”

Further contestation has ensued between the KMT and the DPP, regarding Taiwan’s ability to access vaccines. The Central Epidemic Command Center, which coordinates Taiwan’s response to Covid-19, stated that it originally expected to receive vaccines between March and June, but that vaccines were expected to arrive in Taiwan as early as February.

New export controls on vaccines imposed by the European Union (EU) require approval by the EU before vaccines can be exported to other parts of the world. Some have criticized this as a case of stronger, more powerful countries seeking to hog vaccines for themselves.

But as a result, the KMT has sought to attack the DPP as having failed in its strategy to secure vaccines from western countries, claiming that the DPP’s claim that Taiwan has been edged out by stronger, more powerful countries is false. Members of the KMT such as central standing committee member Sean Lien and former president Ma Ying-jeou have pointed to vaccine distribution in other small countries or territories such as Singapore, Hong Kong, and Israel to suggest that Taiwan is lagging behind other countries, while also suggesting that animosity from China is a key reason for delays in vaccine shipments to Taiwan.

Minister of Health and Welfare Chen Shih-chung has alleged that Chinese interference may be a possible reason for delays in Taiwan receiving vaccines. As the historically pro-China party, the KMT has suggested that if it were in power instead of the DPP, China’s animosity toward Taiwan would be sufficiently decreased that China would not impede vaccine exports to Taiwan.

Taiwan’s inability to obtain vaccines may also be attributed to Taiwan’s exclusion from international bodies such as the UN or UN sub-agencies such as the World Health Organization due to Chinese pressure. The WHO is one of the coordinating bodies of the COVAX agreement from which Taiwan intends to procure 4.76 million vaccine doses, but China has prevented Taiwan from participating in the WHO, even as an observer, under the Tsai administration. The KMT may also hope to suggest that Taiwan would be allowed to participate in the WHO if it were in power.

While this narrative revolves around Taiwan’s access to western vaccines and the influence of the so-called China factor on such access, further down the line, it is possible that the KMT will lean more heavily into a political narrative that calls for Taiwan to embrace Chinese vaccines, playing up the effectiveness of Chinese vaccines. To date, it has been a bridge too far for the KMT to embrace claims that the Covid-19 pandemic did not originate in China, except among limited quarters.

Embracing Chinese vaccines would be a further step for the KMT to take. But this is something the KMT is only likely to attempt if it views itself as having sufficiently eroded at the DPP’s credibility by questioning its vaccine accessibility strategy.

It should not be surprising, then, that the question of Covid-19 vaccines has become divided along lines of national identity in Taiwan. Taiwan proves a fascinating and highly particular example of the vaccine nationalism phenomenon, then—yet this proves a way in which vaccine nationalism often touches on domestic political issues. Perhaps, then, as the particularly Taiwanese example illustrates—in which issues regarding vaccine accessibility touched upon the domestic political split between independence and unification—vaccine nationalism was bound to rear its head in Taiwan and elsewhere.