The 2030 bilingual learning blueprint is becoming clearer, as Taiwan’s next generation takes on “an entirely new experience” 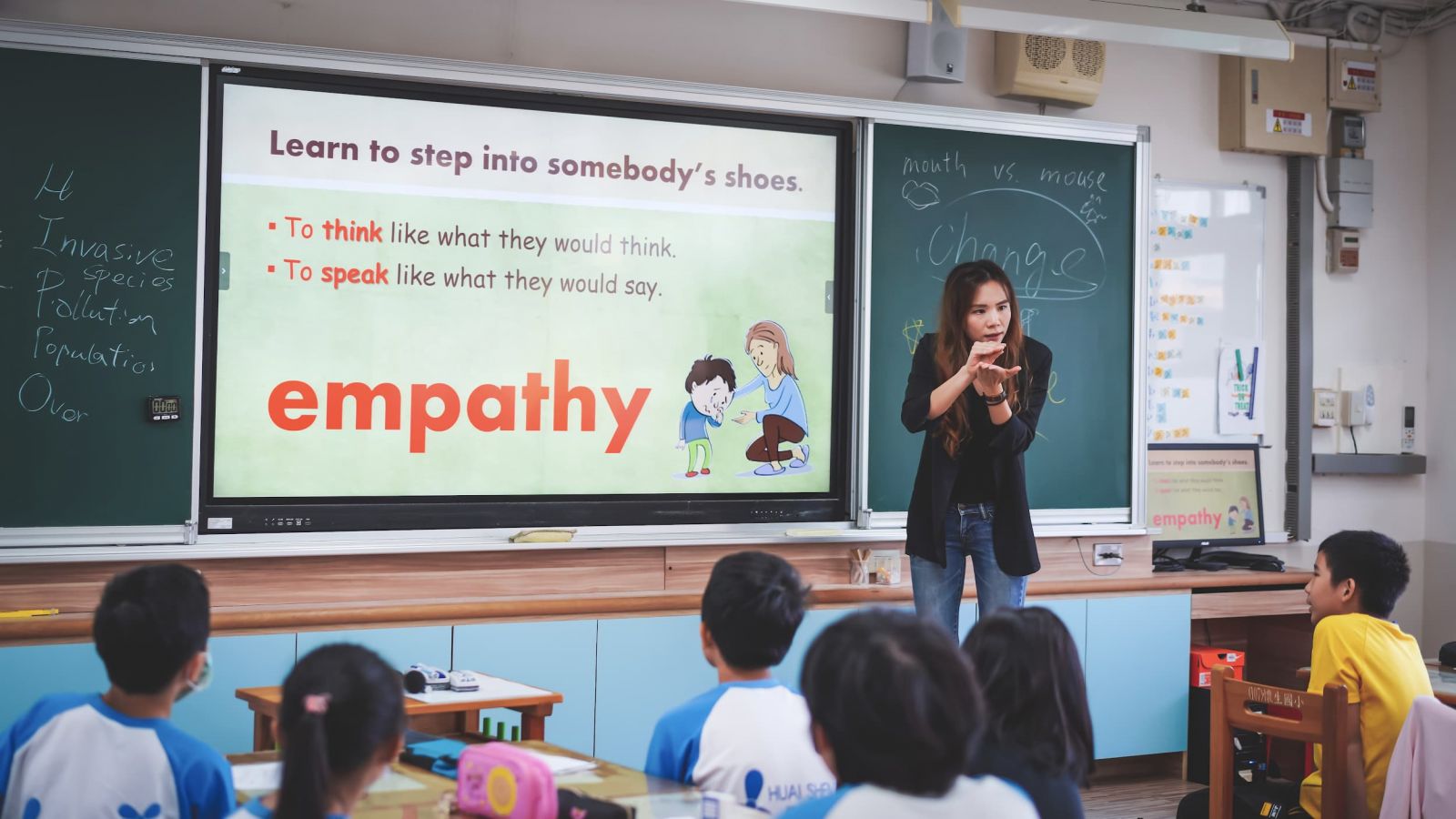 “What animals did you guys learn about?”

“Do you all know their habitats?” Their teacher Serena Lee (李真儀) asked, again in English, before the kids began rattling off a list of different national parks in Taiwan, also in English.

Ms Lee and her kids – Alice, Angel, Bruce, Hudson, Owen, Ray – aren’t from one of Taiwan’s many cram schools, but rather, the local Huai Sheng Elementary School (懷生國小) in Taipei’s Zhongshan District, one of a handful of public schools in Taipei City currently taking part in an experimental bilingual programme.

It is all part of a bigger push for raising English proficiency and the country’s international competitiveness in Taiwan, within the current administration’s ambitious ‘2030 Bilingual Country’ vision. The plan, a blueprint drafted by the National Development Council, builds on Vice President William Lai Ching-te’s (賴清德) earlier efforts to promote English as a second official language. Not just intended for the nation’s students – although it takes up a large chunk of the plan – the 2030 Bilingual Country Project seeks to create a culture of English learning across the board, with plans to introduce English-language versions of all government websites and bilingual frontline assistance from public service providers, as well as to increase civil servants’ English competency.

“It is designed to enhance the nation’s overall competitiveness, rather than the ability to pass examinations,” Lai had said back in 2018.

Since its approval by the Executive Yuan back in 2018, the project has raised eyebrows, stirring up a flurry of scepticism and anticipation – as well as headlines like, ‘Are We Ready?’ and ‘Is It Possible?’

Of all the sectors affected, education has been subject to the most vehement critics, with detractors like City University of Hong Kong president Way Kuo (郭位) deeming the plan “laughable”, and was quoted as saying at the time, “Who is coming to Taiwan to study because we can teach in English?” Image courtesy of Wang Yu Ching/Office of the President

Two years on, and the fruits of labour are becoming more visible: 2020 saw the arrival of upgrades to bilingual services for local banks, the inclusion of English as part of the mandatory training for civil servants, the roll-out of an English version of the National Police Agency app, and many more.

The education sector has continued to implement significant changes, with not only the establishment of free online learning resources for students, such as the NTNU-designed Cool English platform, as well as a push towards recruiting more foreign, native-speaker English teachers. The Ministry of Education announced in July that it is aiming to increase the current hiring quota from 80 teachers to 300 per year – along with plans to increase the yearly budget for bilingual education ten-fold, to NT$2 billion in 2021.

As the race continues for a bilingual 2030, Taiwan’s many municipalities have also fast-tracked their existing bilingual education programmes to catch up to the national plan. According to research conducted by CommonWealth Parenting in 2019, more than 300 public elementary and junior high schools across Taiwan’s 22 primary administrative divisions currently have bilingual programmes, with either Content and Language Integrated Learning (CLIL) and English as a Medium of Instruction (EMI) curriculums – with the former involving subjects like PE or social studies being taught bilingually, and the latter being focused more on English immersion.

As Huai Sheng’s Serena Lee says, the CLIL programme has been adopted by Taipei, along with New Taipei and Keelung, while Taoyuan has opted for an EMI ‘all-English’ approach. “But either way, it’s more or less the same – the point is to integrate English into the learning environment,” Lee says.

As an English-turned-CLIL teacher, Lee jokes that, previously, her role was more like that of a salesperson, drilling into kids the importance of learning English. She notes that Taiwan’s education style has been traditionally more rigid than its Western counterparts, but CLIL can now offer a much more integrated way of learning.

Rather than learning English for English’s sake, she says that students can now use English “to learn something really deep”. According to her, “It’s an entirely new experience for our kids, which is really great.” 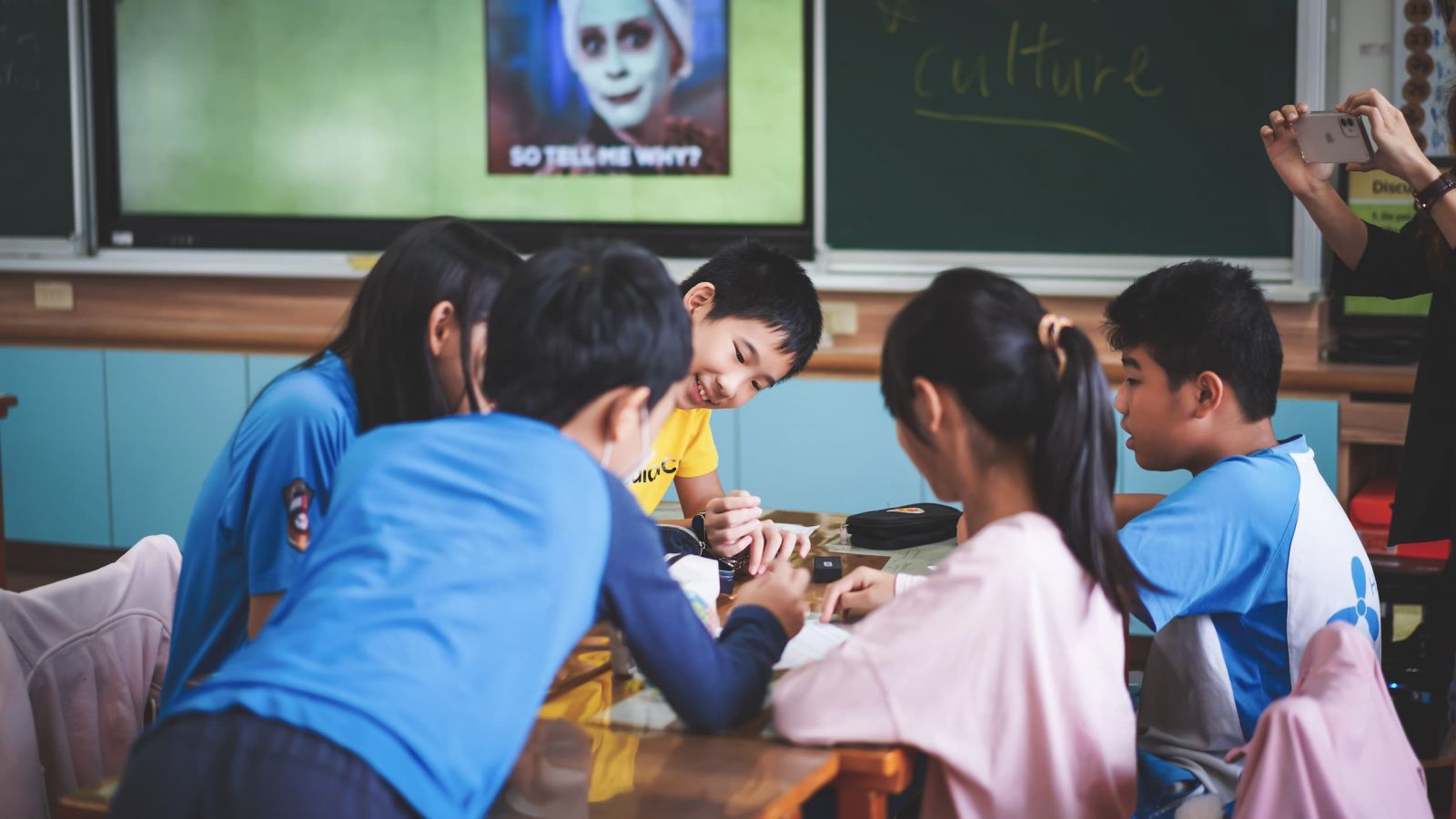 Since Huai Sheng’s experimental programme began only in 2018, her sixth-grade students only began to access CLIL-oriented classes starting from fifth grade, with the previous four years of their English education being relegated to traditional English subject classes.

Though this transition is recent, and not all of them may be fluent in English, they have been given the opportunity to soak up English in a more everyday context through their teacher. “They’re not scared when I suddenly switch from Chinese to English,” she says, adding that many students are able to autonomously take down notes in English, or have also begun to naturally use simple English sentences in the home.

For Taipei City, the programme is projected to expand from 20 to 50 schools. Currently, everything seems on track: according to a survey conducted by Taipei City’s Department of Education back in February, 94% of parents were in favour of the continuation of bilingual education, while 74% of students saw an improvement in their English proficiency and 90% of teachers believed students were more confident to speak English after one semester. And, according to the Huai Sheng students, it certainly beats tasks in traditional English subject classes, like memorising vocabulary.

Like many other municipalities, Taipei is pushing to hire more teachers, but it comes in the midst of what many are deeming a national teacher shortage. This year, of 91 bilingual teacher positions in the city, only 22 were filled. With regards to the shortage, Taipei City Mayor Ko Wen-je (柯文哲) had said that training teachers takes time. As the government continues to promote the 2030 Bilingual policy, it is clear that the lack of bilingual or English native-speaker teachers may be the plan’s biggest challenge.

Currently, many municipalities delegate hiring agencies to engage teachers from abroad. Teach Taiwan, one of the agencies, did not respond to our inquiries.

As Zona Tang, a former cram school and current kindergarten English teacher tells me, buxiban culture has always been driven by a certain competitiveness and anxiety about English learning.

“Many parents want their kids to get a head start,” she says. “Everybody thinks it’s easier and better to learn a language from a young age.”

With some kids taking part in English cram school classes and others not, there has long been a gap in English learning amongst students in the nation. As Tang says, “Kindergarten English often already exceeds that of first or second grade English classes in public schools. Meanwhile, sixth-graders in buxibans have probably already learned most of what would be taught at the junior high level.”

“We have a student in our class who has been in the buxiban system for a long time, and his level is probably comparable to junior high students,” Serena Lee says. “He can tune out completely in an English subject class, but not in my CLIL class.”

Ultimately, for Lee, CLIL offers a brand-new opportunity to “eradicate” the gap completely. “CLIL offers what buxibans can’t, because we’re not just teaching a language anymore,” she says.