Race and identity in Taiwan

How to understand reactions to Black Lives Matters in Taiwan 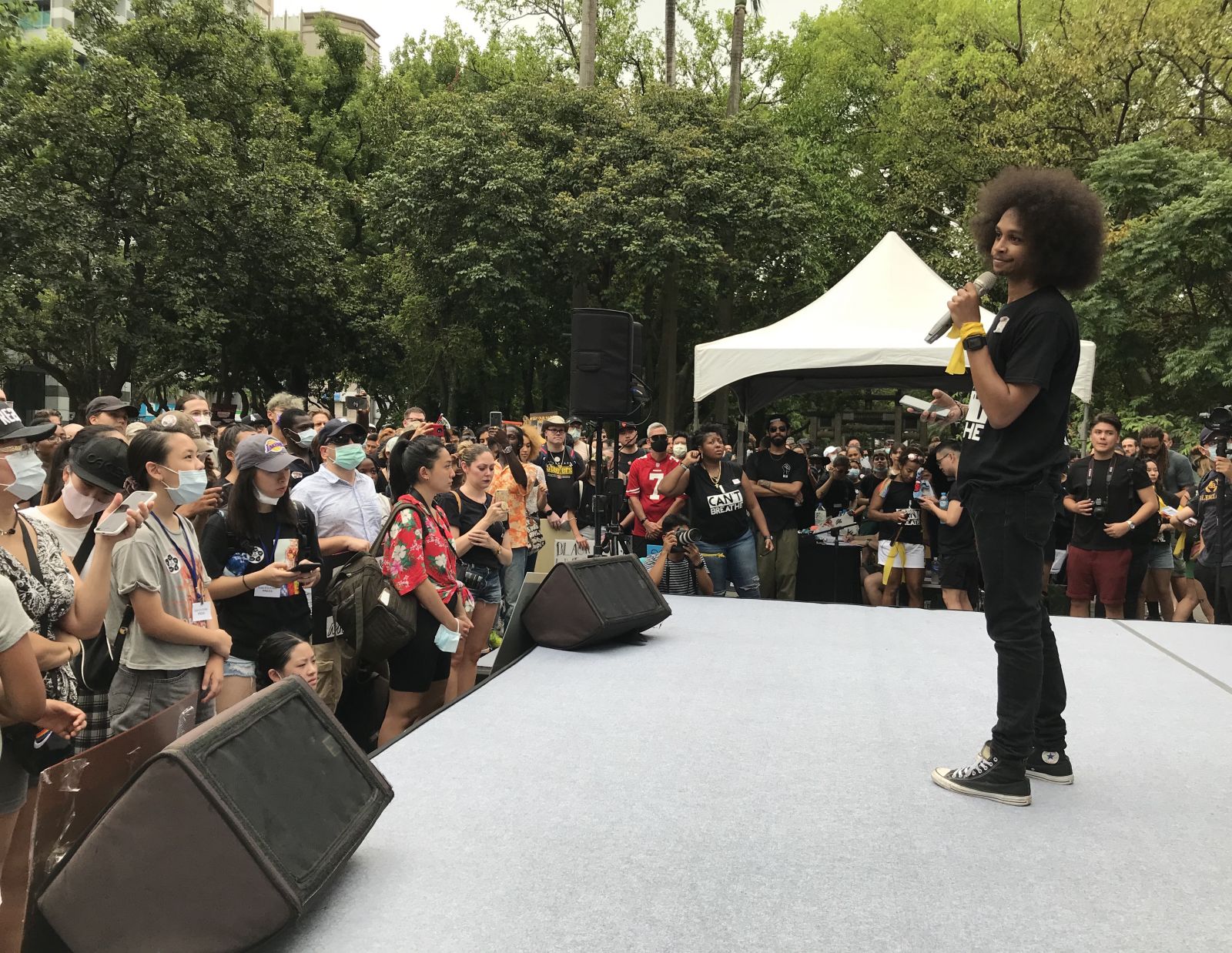 Reactions to the outbreak of protests in the United States after the killing of George Floyd have been divided, even among individuals who a few years ago were being condemned as violent “rioters” in the media during the Sunflower Movement in 2014.

Prominent activist designer Lao Dan would condemn the protests, dismissing them because of the looting which has taken place during the protests to date. Shinichi Chen of the Taiwan Statebuilding Party would go so far as to accuse the protests of having been orchestrated by the Chinese government in order to target the Trump administration.

However, Wu Cheng, a spokesperson of the occupation in the Legislative Yuan during the Sunflower Movement that eventually joined the New Power Party, was supportive. Likewise, indigenous activist Savungaz Valincinan, who was also a participant in the Legislative Yuan occupation and later worked for the Democratic Progressive Party (DPP), spoke at a Black Lives Matter protest in Taipei in June, connecting discrimination against Indigenous people in Taiwan to discrimination against black Americans in the United States.

In her comments, Valincinan rebutted the statement by Ministry of Foreign Affairs spokeswoman Joanne Ou that there was no such thing as racism in Taiwan. Ou had commented that “the concept of racism does not exist in Taiwan” in response to accusations by World Health Organization director-general Tedros Adhanom Ghebreyesus that the Taiwanese government had engaged in a “racist” online campaign against him.

Valincinan‘s comments had previously been echoed by Presidential Office spokeswoman Kolas Yotaka, who is also indigenous. In a Tweet, Yotaka stated, “Anti-black racism is everywhere, including Taiwan. This is the time to examine ourselves, our own discrimination against darker skinned people, whether SE Asian, African, diaspora, or Polynesian indigenous.”

But Ou’s comments are perhaps instructive of how many in Taiwan conceptualise the problem of racism in Taiwan, namely, that there are many in Taiwan who have scarcely reckoned with the realities of racism, who in fact, may believe the fact that Taiwan’s society is primarily racially homogeneous demonstrates that racism does not exist in Taiwan. Racism is thought of as a problem that more visibly multiethnic societies, such as those in the United States or Europe have, and some do not take into account that this means minority groups in Taiwan face all the more discrimination.

Frameworks for understanding race in Taiwan

One of the primary frameworks for understanding relations between different racial groups in Taiwan has been that of the “Four Great Ethnic Groups” (四大家族), a notion which was promoted by the Chinese Nationalist or Kuomintang (KMT) party historically. The “Four Great Ethnic Groups” are waishengren (外省人, or foreign-born), benshengren (本省人, or locally-born), Hakka (客家人), and indigenous (原住民).

Given that Taiwan is a majority Han society, the most visible “racial” division for many in Taiwan is the division between waishengren and benshengren. There has historically been an economic and political split between both benshengren and waishengren, but both are ethnically Han groups.

While benshengren, who are descended from earlier waves of Han migration to Taiwan over several hundred years constitute around 88% of the population, benshengren were discriminated against during the authoritarian period. During the authoritarian period, waishengren, those 10% of the Taiwanese population who came with the KMT to Taiwan after the end of the Chinese Civil War, constituted a privileged economic and political class, with some careers remaining only open to waishengren. With the third generation of Taiwanese since the KMT came to Taiwan, overt distinctions between waishengren and benshengren in terms of speech, dress, and mannerisms are less visible.

The split between benshengren, who are primarily of Fujianese descent, and Hakka has been another historic split, dating back to before the KMT came to Taiwan, and with conflicts between both groups for resources, as well as due to differences in language, customs and lifestyles. But, similarly, benshengren and Hakka are both Han groups.

Of the “Four Great Ethnic Groups,” Taiwanese indigenous are not Han. However, the KMT has attempted to claim indigenous as being part of the Chinese race nonetheless, with race defined as all those loyal to the notion of a Chinese nation-state, as the so-called zhonghua minzu (中華民族). Again, only indigenous out of the “Four Great Ethnic Groups” are not Han, and the division between benshengren, waishengren, and Hakka is a sub-ethnic one.

Racial discourse has undergone a shift in past decades in Taiwan, contiguous with rising Taiwanese identity. Individuals that identify with Taiwan, rather than China, have sought to find ways to differentiate Taiwan and China. For example, in the interests of Taiwanese nationalism, some have attempted to suggest a fundamental ethnic difference between benshengren and waishengren, including pointing out that many waishengren have some element of indigenous descent, or even outlandish claims that benshengren were not actually Han, but were Taiwanese indigenous that resembled Chinese Han. Such claims were more prevalent during the height of benshengren ethno-nationalism in Taiwan, under the Chen Shui-bian administration, at a time in which the DPP leveraged heavily on benshengren ethno-nationalist identity.

But, as political scientist and theorist Wu Rwei-ren (吳叡人) has argued in When Formosa Reclaims the World (受困的思想：臺灣重返世界), because of the fact that Taiwan is a majority Han polity, efforts to find an essential racial difference between Taiwan and China are futile, because China is also a majority Han. This is what has led efforts to assert a distinct Taiwanese national identity to shift from an ethnic basis to a civic one, with Taiwanese identity defined as distinct from Chinese identity through being more inclusive--gradually expanding to include people that were originally excluded from the parameters of Taiwanese identity.

So, then, in the wake of a period of benshengren nationalism, one begins to see efforts to include waishengren, Hakka, and indigenous into an increasingly expanding definition of Taiwanese national identity

With growing immigration to Taiwan from Southeast Asia, this has also led immigrants to be added to the framework of the “Four Great Ethnic Groups” as “new immigrants” (新移民). “New immigrants” broadly refers to individuals who have immigrated to Taiwan that are not members of the “Four Great Ethnic Groups”, oftentimes from Southeast Asia. Some are of Han descent, while others are not. It is believed that one in ten elementary or middle school children has a foreign-born parent, usually a mother.

There has also been increased attention in past years to how, despite being Taiwan’s first inhabitants, many indigenous continue to face discrimination and are economically disenfranchised compared to other groups. An example would be president Tsai Ing-wen’s 2016 apology to indigenous people on behalf of the Republic of China government.

Yet even with the expansion of the definition of Taiwanese identity, it is apparent that many of the central ethnic conflicts in Taiwanese history in the post-war period have still been between Han sub-ethnic groups. As such, it may not be surprising that Taiwan has yet to engage with its own history of racism.

The Tsai administration has attempted to point to the pluralism of contemporary Taiwan in order to highlight differences from China. Contemporary China can be seen as a Han ethno-state, after all, in which minorities are subject to authoritarian measures aimed at assimilating them into the Han majority, such as regarding Uighurs, Tibetans, or other ethnic minorities. But as Wu argues, Taiwan’s contemporary embrace of pluralism is primarily a national identity-building strategy, rather than a moral position.

Consequently, it may take longer for words to meet ideals. Indigenous and Southeast Asian migrants continue to face discrimination or stereotyping in Taiwanese society. Incidents such as the shooting death of Vietnamese migrant worker Nguyen Quoc Phi in 2017, the exploitation of deep sea fishermen from the southeast Asia under conditions that have been termed modern-day slavery, or the disproportionate use of police at protests involving Taiwanese indigenous people highlight how racism is, in fact, still an issue in Taiwan--one which has had deadly consequences in the past.

As continued controversies regarding the use of blackface in performances by groups such as the Wackyboys or the toothpaste brand “Black Man’s Toothpaste” (黑人牙膏) highlight, increased attention to pervasive attitudes of anti-blackness globally sometimes have not translated to Taiwan. Despite the fact that demographic shifts in Taiwan will increasingly make it clear that Taiwan is a pluralistic society in the coming decades, it will require much advocacy to change this situation in Taiwan, with shifts needed to occur on the everyday level. It remains to be seen how this is to take place, though educational efforts and dialogue will play a key part. The overall framework by which Taiwanese evaluate racism in Taiwan will need to change, then, as Taiwan becomes an increasingly diverse society.

MOST POPULAR
Accessible, efficient and affordable