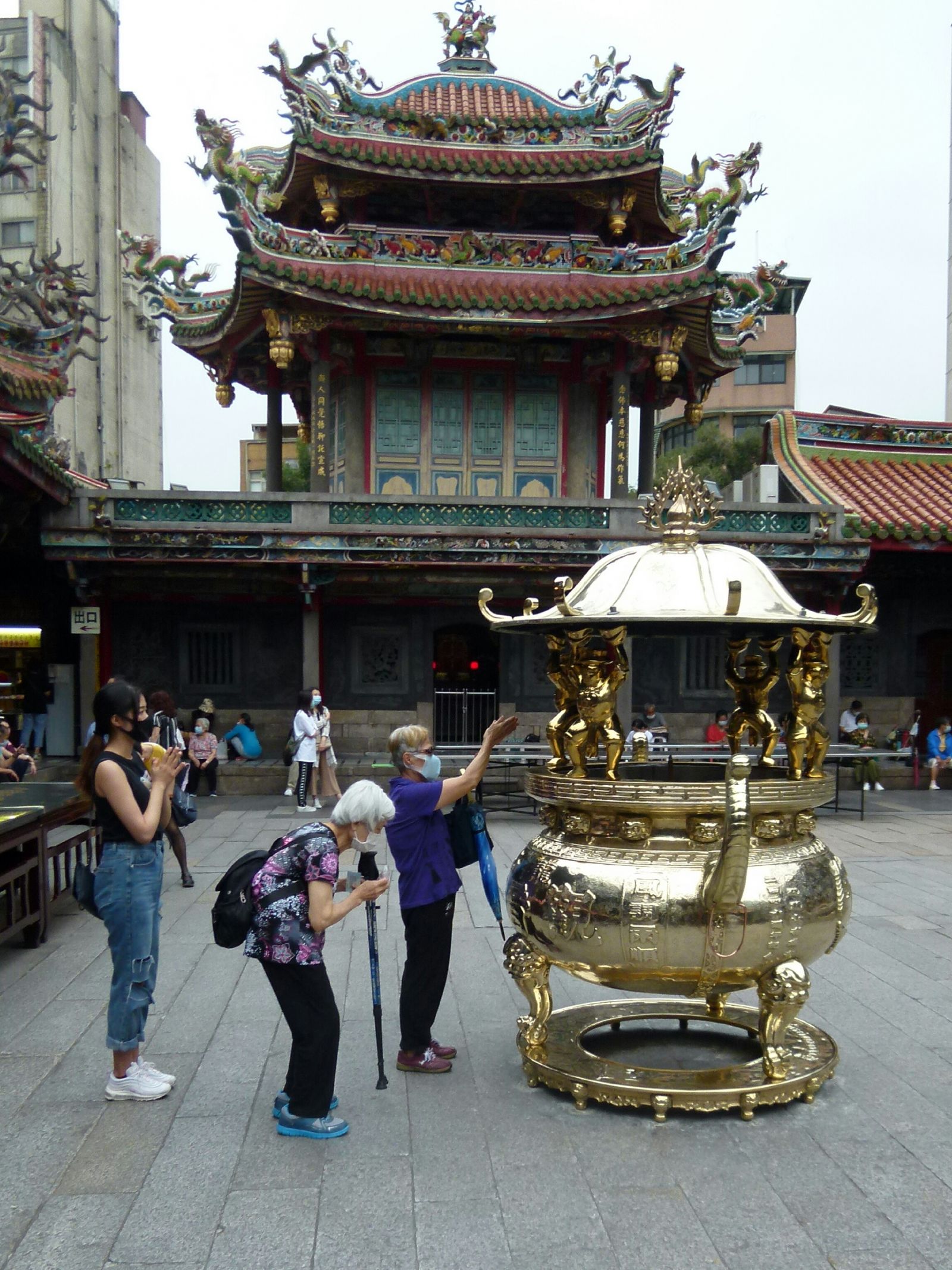 Worshipers at Taipei’s Longshan Temple go about their normal practices

In mid-April this year, with the coronavirus pandemic raging worldwide and still ongoing in Taiwan, Health & Welfare Minister Chen Shih-chung went to the Jenn Lann Temple in Dajia, Taichung, to offer birthday wishes to the seafarers' deity Mazu and to pray for her assistance in conquering the disease.

At first sight, it might seem odd for a man of science, in a country that has so far has out-performed just about everywhere else in its rational application of quarantine, contact tracing, phone tracking and other preventative measures, to be asking for the help of a fisherman's daughter from Fujian Province who died more than 1,000 years ago. But such is Taiwan's curious interplay of modern and traditional cultures, not to mention its delicate balance of political and economic forces.

What Chen was really doing was showing public gratitude to the temple's chairman Yen Ching-biao for postponing this year's Mazu Pilgrimage. This would have seen the deity's statue carried by palanquin to visit more than one hundred other shrines dedicated to her throughout Taichung, Changhua, Yunlin and Chiayi. Thousands of people annually jostle to touch or merely glimpse the statue as it leaves Jenn Lann Gong, and around a million others line the 340-kilometre route taken by the palanquin over the following nine days. Other associated events include a banquet for around ten thousand diners, a concert, and cultural exchanges with groups from China.

Towards the end of February, as the ferocity of the viral epidemic was becoming apparent, and with cluster infections in Singapore and South Korea being linked to religious gatherings, in Italy to its second religion of football, and in China’s Wuhan itself, to a massive Lunar New Year banquet of tens of thousands, Taiwan's health authorities pleaded with the temple to cancel or postpone the event.

But, as late as 27 February, Yen refused, insisting that, on the contrary, people should not be afraid to participate, as they would be protected by Mazu and other deities. Finally, the next day, he acquiesced, and it was for this, plus a donation by the temple of NT$30 million to the Taiwan Centers for Disease Control, that Chen paid his visit.

Countless other mass religious events that normally take place in the spring have similarly been cancelled or cut back in size. These include the Bao-an Cultural Festival, one of the largest “Taoist”* festivals in Taipei City, centered on the birthday of another 10th-century Fujianese, Baosheng Da Di, the ‘Great Emperor Who Preserves Life’, as well as Buddhism’s Cleansing the Buddha Festival to mark Sakyamuni’s birthday. Celebrated on different days by the Theravada and Mahayana traditions, the former, in which thousands of Thai, Burmese and other Southeast Asian devotees riotously throw water on each other in New Taipei City’s Nanshijiao neighbourhood, was postponed and will now take place on 24 May, the latter, in the case of Taiwan’s largest Buddhist group, the Tzu Chi Foundation, was moved online, where adherents could digitally ladle water over the Buddha’s feet. Celebration of Easter was similarly moved onto Youtube by the Catholic Archdiocese of Taipei.

Daily business, as opposed to large-scale events, has largely continued, however. Procedures at the Longshan Temple in Taipei’s Wanhua District resemble those of department stores and public buildings, with visitors only being allowed to enter through one door -- where their temperature is checked and they are required to put on a face mask -- to follow a set route, and to leave by another door.

“Attendance fell away initially,” the temperature monitor explained, “but has since returned to normal.” Lonely-hearts still pray to the Old Man under the Moon, students facing exams consult Wenchang Di, the ‘Emperor of Prospering Culture’, and pregnant women solicit Zhusheng Niangniang, the ‘Queen Registrar of Births’, for a successful delivery. Divinatory blocks and sticks are thrown and plucked respectively, and fortune-telling experts are on hand to interpret obtuse readings, albeit from behind facemasks and at a ‘social’ distance. Money changes hands; business goes on.

All is not so convenient for some more structured faiths, such as Islam and Christianity in which religious services play a key role. 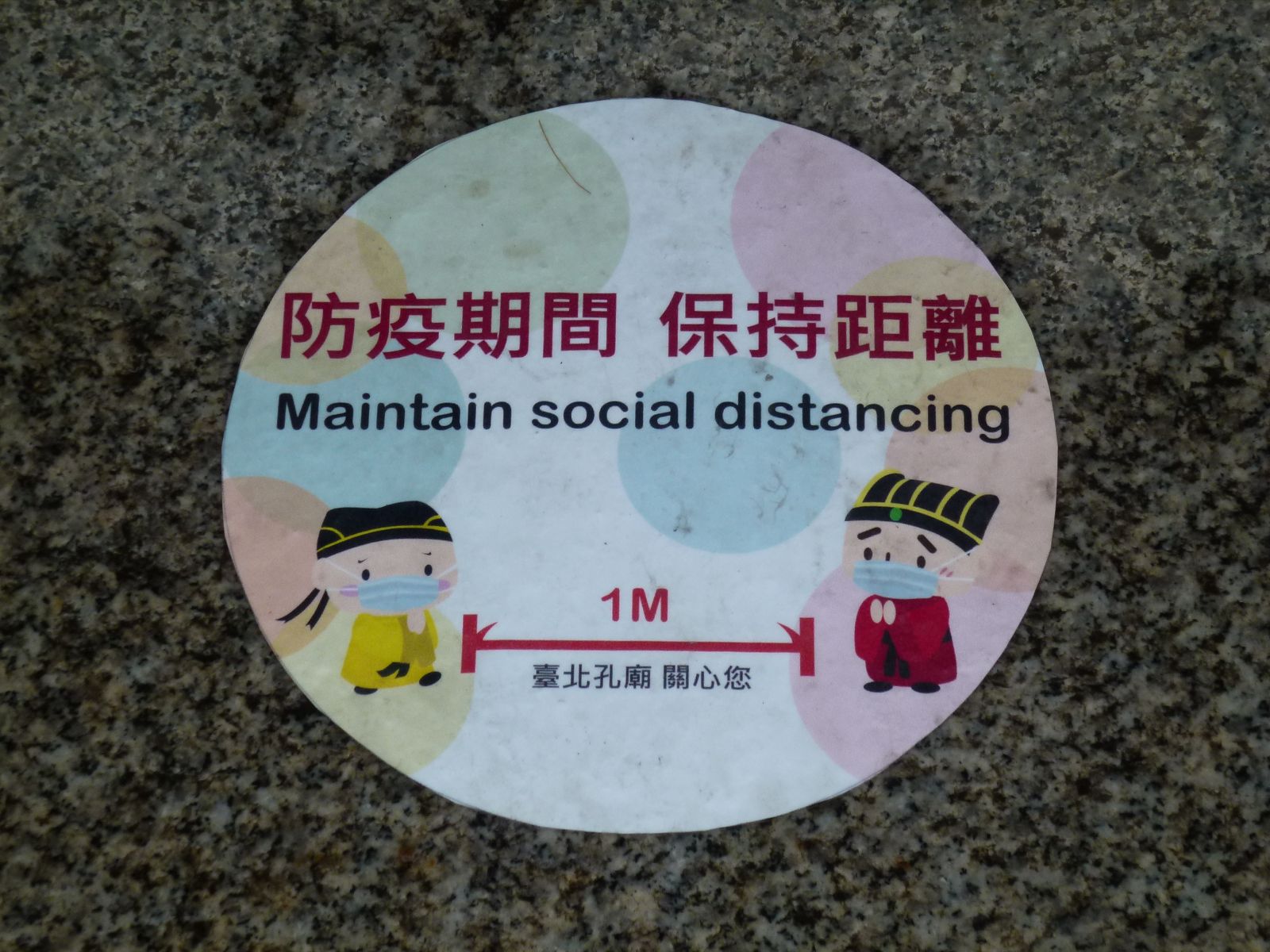 “All weekday and weekend Masses were suspended from 8 March in accordance with instruction from the Executive Yuan, and weekly services at the Holy Family Catholic Church were uploaded to Youtube,” says Geni Kim, of the secretariat of the Archdiocese of Taipei.

“Given stabilization of the domestic situation,” however, Kim says celebration of Holy Eurcharist was reinstated from 4 May. “Each Mass is limited to 100 participants, and each person must be registered. The arrangement of seats must be formed like a ‘plum blossom’, that is, alternated between the front row and the following rows to ensure social distance of 1.5 metres. Parishes with large numbers of faithful are recommended to increase the number of Masses, or to change to an outdoor setting. Priests and Eucharistic ministers must clean their hands with Isopropyl alcohol before distributing Holy Communion. Each parish is advised to devise its own method for receiving the Mass collection in order to reduce the chance of contamination by hands. After each Eucharistic celebration, the church building must be thoroughly cleaned and disinfected.”

The matter of collection is critical, as this represents a significant source of income for some church-affiliated welfare groups.

A few metres down Xinsheng South Road from the church, Taipei’s Grand Mosque closed its doors on 26 March but has yet to reopen. The hugely important Eid al-Fitr celebration to mark the breaking of fast at the end of Ramadan, regularly attended by tens of thousands of Taiwanese citizens, migrant workers and visitors, will not take place on 24 May. This may be in reaction to the controversial mass gatherings by the Islamic Tablighi Jamaat  group in Malaysia in February and India in March that led to spikes in transmission and widespread dissemination of the coronavirus. From time to time, sermons have been posted on mosque’s perimeter gates.

Almost untouched, by comparison, is Taiwan’s small Jewish community, which numbers around one thousand members spread around the country. Rabbi Shlomi Tabib of Taipei's Chabad Jewish Center says “That we have managed to maintain our activities throughout the whole crisis, a lot of credit is due to the Taiwan government and authorities for being on top of the game.

“Our gatherings have shrunk in size because tourists and travellers moved out of the country, but most other people realised it was safer to stay here. We still provide kosher meals, maintain the Sunday school and the Hebrew school. Of course precautions are taken and everyone is aware of the rules of what needs to be done and what needs not to be done. Our most recent activity was a celebration barbeque and bonfire for Lag BaOmer, with about 60 to 70 people attending, which was convenient because we held it out in the open rather than being in an enclosed space.”

The Buddhist Compassion Relief Tzu Chi Foundation, being far more than a religious organisation in also running seven hospitals, a university, recycling centres, and numerous emergency response and social welfare charities, has been in a unique position to respond to the coronavirus epidemic. In addition to its professional staff being on the frontline in its medical facilities, its army of volunteers have carried out additional duties such as maintaining phone contact with sick and quarantined people, and even joining factory production lines to assist in the manufacture of surgical masks, foundation spokesperson Chad Liu claims. The group’s founder and leader, Dharma Master Cheng Yen, personally leads a daily prayer and chant at the Tzu Chi headquarters in Hualien to pray for peace in people’s minds and a world without disasters and epidemics.

Despite Tzu Chi’s presence in many sectors of Taiwan society, it in no way represents Buddhism nationally. Buddhism has no equivalent of a Pope, Taoism no Archbishop of Canterbury.

When it comes to epidemic control, this is double edged. Whilst it means that there is no central authority within each religion to hand down instructions to its followers, and so individual groups and temples are, to some extent, free to follow their own ideas when deciding how to implement social distancing and hygiene regulations. Thus Yen Ching-biao’s initial claim that people attending his temple’s procession would receive supernatural protection against the virus and so it would go ahead.

On the other hand, it also means that without any collective voice, the government has, by and large, been able to successfully promote its regulations. One attempt to generate such a unified voice can be seen in Yen’s other claim that, while he was quite happy to postpone this year’s pilgrimage, the decision was not his alone as other temples throughout central Taiwan were also involved.

Fortunately, for the sake of the Jenn Lann Temple’s followers and wider Taiwan society, sanity prevailed and he eventually fell in line with government regulations. In any case, assuming local transmission does not reappear, the pilgrimage, which is listed by the Ministry of Culture as one of the nation's "intangible heritages", will take place later this year.

Mark Caltonhill is a Taipei-based translator and writer. He is the author of ‘Private Prayers and Public Parades ~ Exploring the Religious Life of Taipei’