With the passing of Andy Gursch, the world has lost a passionate environmentalist and the ECCT, one of its finest ambassadors

On 26 March 2011 Andy Gursch sent me an email with just a subject heading that read “Give me a call today” and his phone number. Later on the same day he sent an email, suggesting an Earth Day event for the ECCT. The next day, CEO Freddie Höglund, Jerry Fong and I met with Andy for coffee in the open-air restaurant in the Sun Yat-sen Memorial Hall Park. It was a beautiful spring afternoon, and a fitting setting among the trees for a man who will be remembered as a passionate and dedicated environmentalist. As we enjoyed the fresh air and warm sunshine, Andy was in his best and most charismatic form. He was lively, animated, humorous and full of ideas, most of them about how we need to change the way we live for the sake of the planet and the future of humankind. For the next two hours we tossed around ideas and hashed out a plan to set up a Low Carbon Academy under the ECCT umbrella. I put the concept into writing and three days later Andy replied with his notes. Over the next few months, under Freddie’s leadership, and with input from other ECCT members, like Raoul Kubitschek, the concept morphed into the Low Carbon Initiative, which held its first formal meeting in September and its first large-scale event in June 2012. The LCI has since evolved into one of the ECCT’s most recognised flagship initiatives, attracting the attention and participation from global corporations and governments in Taiwan and Europe.

This was just one of Andy’s great contributions to the ECCT, on top of numerous other activities and actions that he spearheaded in Taiwan. Andy recognised that European countries and companies are global leaders in environmental technology and carbon reduction initiatives and that, as the leading organization representing European business in Taiwan, the ECCT has a unique opportunity to showcase the efforts of its members and create business opportunities around the theme of a low carbon future. And, while he was undoubtedly one of the initial driving forces behind the LCI, he never took credit for it. I don’t think he cared as long as things were moving in the right direction and progress was being made. That, for me is the enduring legacy of Andy Gursch. He did all he could to push forward a progressive environmental agenda and was happy to see things succeed, even if his own input was not recognised.

His first job in Taiwan was as the Market Development Manager for Rethmann (now Remondis), starting in 1996. He later also served as General Manager for the group’s subsidiary, Mi-Way. His next job was for Swire-SITA in 2004 - 2005 before taking on the role of Environmental Area Manager for the German Trade Office Taipei in 2005. He later served as Deputy Director of the German Trade Office (from 2008-2009) and Acting Director from 2008-2009. He left the office in 2009 to establish a consultancy named INEP-Asia with two German partners, which consulted Taiwanese and German companies in the field of environmental technology. His most recent position was as Taiwan Sales Director for Schüco International.

But for a true picture of how Andy touched the lives of so many people, please read the following tributes from those who knew Andy.

I've known Andy for almost 12 years and, like myself, he was a long-time resident in Taiwan. He served for over a decade as one of the co-chairs of the ECCT’s Energy & Environment committee, dealing with issues that were very close to his heart. In 2011 Andy, Duncan Levine and myself were sitting in the San Yat-sen Memorial Hall Park having coffee together on a beautiful sunny spring day when we came up with the idea to start the ECCT’s Low Carbon Initiative or LCI. Since then the LCI has grown to become one of the most prominent initiatives of the ECCT and I know that Andy would proudly have wanted to be remembered for his contribution to the environment. This is part of his legacy.

Dear Andy, it was with shock that we learned of your passing. We will dearly miss you and your bright colourful personality, always positive, always full of energy. Our thoughts are with you and your family, may you forever rest in peace.

I have been calling Taiwan my home since end of 2007 and had the pleasure to have known Andy since this very first beginning. He was my first boss, and 20 years senior to me, both of us with a background in Chinese studies and coming from Berlin, where I was born and which he adopted as his German hometown during his studies there. In terms of career he was clearly walking in front of me and was already deeply involved at this point in renewables, sustainable buildings and energy efficiency. It was very impressive to see a German to speak and present in fluent Mandarin, understanding Taiwan, knowing how build bridges and where you can lay down their foundations, and trying to change the big picture by standing in for a radical change of our economic behaviour and actually also not giving up on it, even so you were obviously hitting a lot of walls in Taiwan. I had the wonderful role to assist him in organizing, writing proposals, meeting people and expanding networks from photovoltaics, to architecture, onshore wind and geothermal and all along the line of German as well as European – Taiwanese cooperation.

Even as I progressed on my own career path transitioning more into renewable energy and he changed his towards sustainable buildings and urban planning, we always kept on meeting up and discussing ideas, Taiwanese politics and either proceeded together or just helped the other one to get a better sense of direction for things we were working on. There are many things that I am grateful for that he has either been initiating or working on, from our work in the ECCT Energy & Environment committee to his relentless drive to create tools to help Taiwan to become more environmentally friendly, which was only one of his many projects and would be a platform that would promote sustainability and ended up with the now very successful Low Carbon Initiative, which from his pushing, me assisting him a bit and the ECCT putting it on steroids, led to a very successful project which is alive and kicking now with six times the members it had when it started. He would aim high, but he would also know what was achievable in Taiwan and how you could get there and in doing this he would inspire, motivate or push people in his network or that needed to be part of it. Without his advice to always have an open door for people and their ideas, it would not have allowed me to have a fateful meeting that progressed to become the Taiwan Renewable Energy Alliance (TRENA), one of the major NGOs in this field in Taiwan, on which I am a board member.

Andy was much more active than only along the lines of sustainability. He was always looking for ways to create space for a German-Taiwanese dialogue. After his father passed a couple of years ago he took all the inherited furniture and art and created the Salon Berlin (柏林客廳) in Hsinyi, a place to meet for NGOs or artists to perform. He replicated and built on the idea with “Tacheles” (柏林廢墟) a smaller house in Wanhua, which became a space for artists and social projects for the community. It was probably his idea of the Berlin he spent his formative years in as a student in the late 1980s and early 1990s, a city vibrant with change after the wall came down, an international melting pot and cultural centre. I guess, he wanted to bring that spirit and idea into Taipei, and I hope this idea will live on even though he is gone.

Andy has left us too soon. Over his life he achieved much, and sometimes failed, but always pushed on the path he was walking. We just had started to sketch a new project he had picked up on, which as so often I first would find so outlandish, but we would bring it into a form and get it going, sadly not this one. It is still inconceivable that his life was cut so short.

Andy, I would like to thank you for walking ahead of me, giving advice, letting me shape your wonderful ideas together to create something meaningful for our home and being supportive in difficult times. You certainly have helped me to grow roots and build a family in Taiwan. You will stay with us as an inspiration to be an active part in society to change things for the better.

There are no words to describe our loss at Andy’s passing. He was my friend and mentor in the environmental business. Both Andy and I had just one goal in life and we dedicated ourselves to maintaining a green land, clear water and a blue sky in Taiwan for the sake of our kids and future generations.

Many of us have enjoyed Andy’s companionship, both on jobs and for his dedication to promoting the use of renewable energy, introducing ideas of ecology, sustainability and energy-saving in Taiwan. We are very proud of Andy who, while working for Schüco Taiwan, built up a sustainable collaboration with the building and construction industry in Taiwan. His vibrancy and enthusiasm made him a great person to have around. He was an outstanding colleague, and his accomplishments reflected that. Furthermore, Andy was deeply appreciative and understanding of all people. He was a leader, a great motivator and a role model to many of us. We deeply mourn his loss in the whole Schüco community, and our thoughts go out to his family and his close friends. 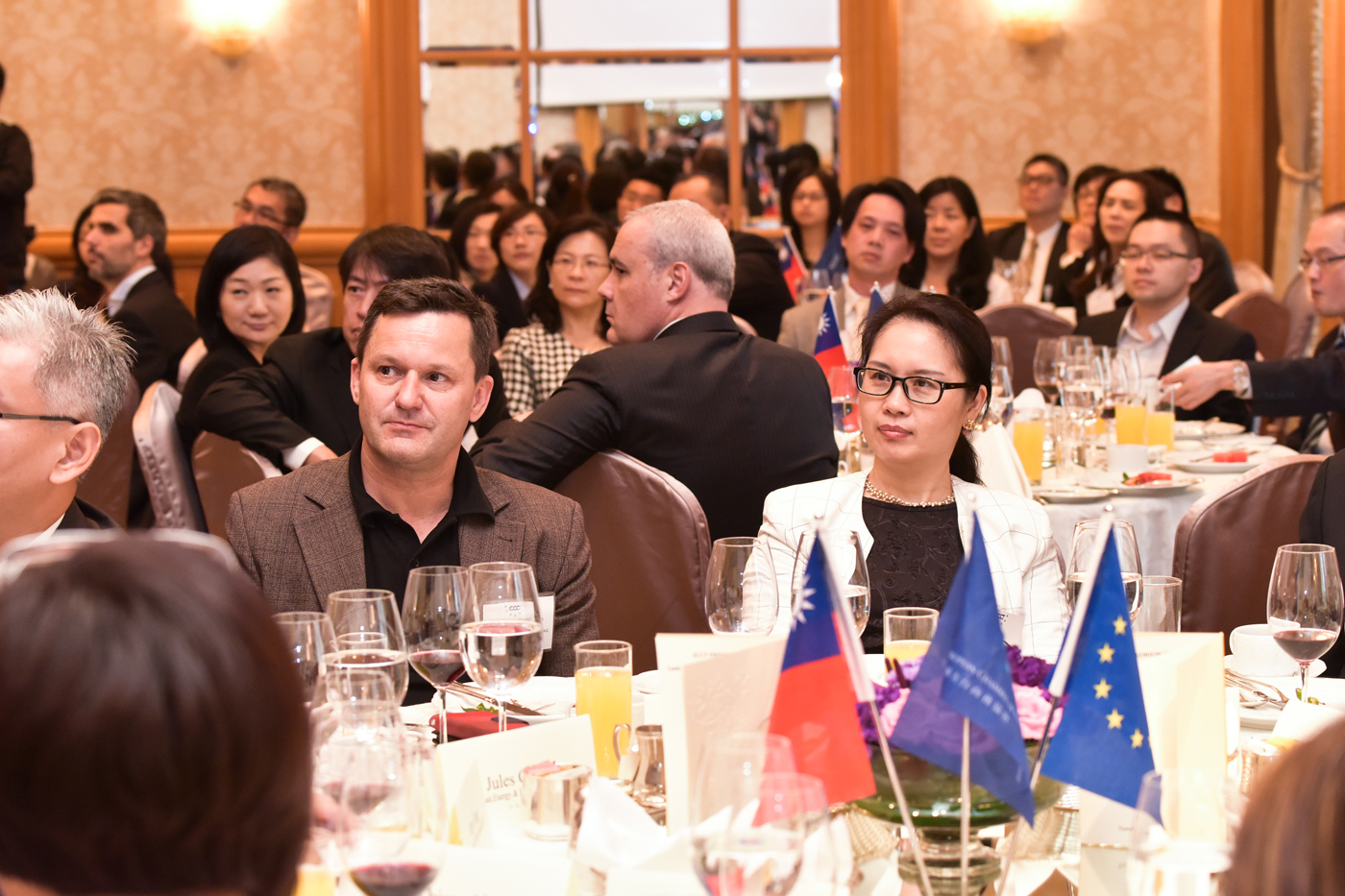 Andy (2nd from right), ahead of press conference launch of the 2017 Position Papers, in his capacity as Co-Chair of the Energy & Environment committee