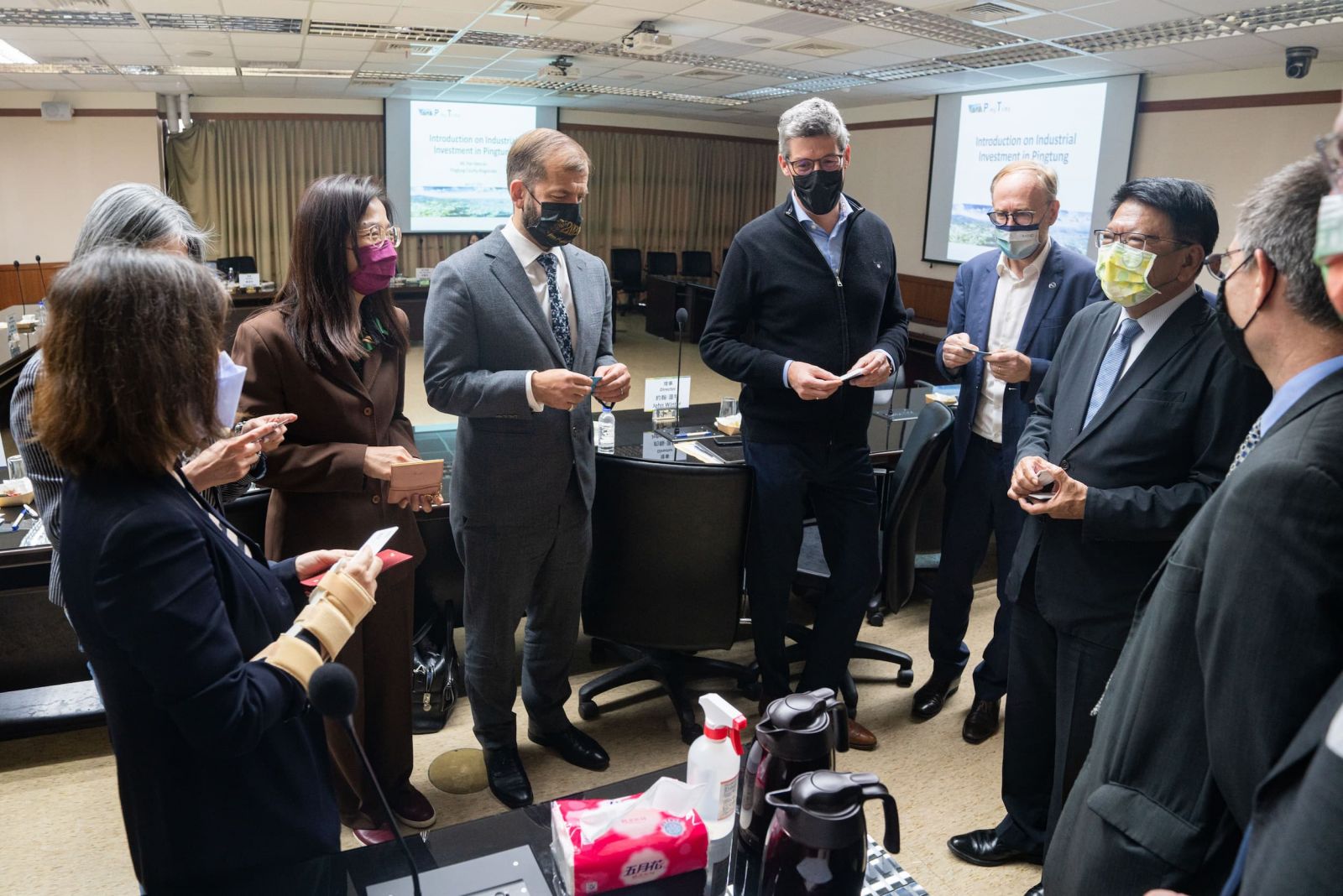 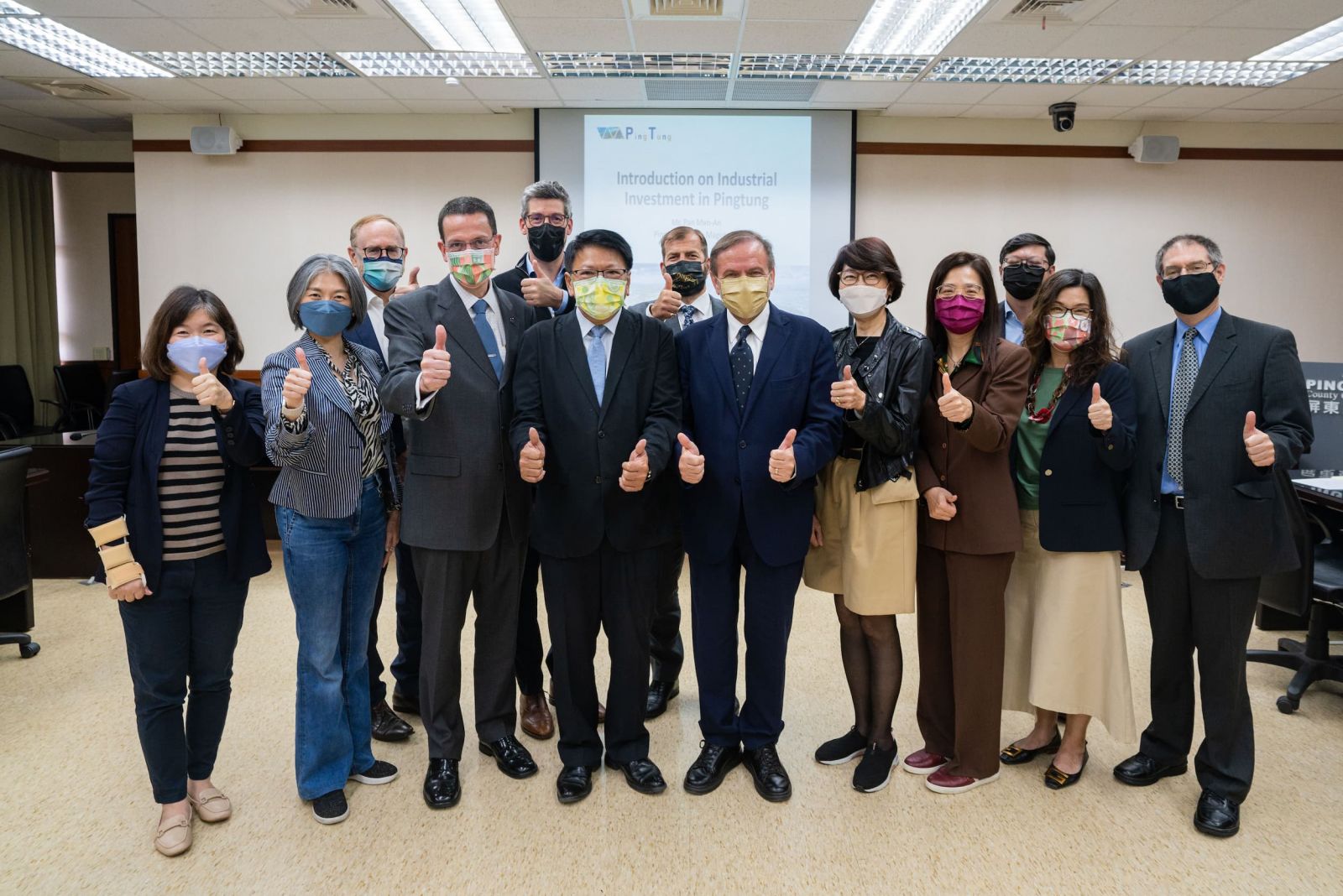 The ECCT delegation at the lunch meeting with Pingtung Magistrate Pan

In his presentation at the lunch, Magistrate Pan gave an introduction to Pingtung and business opportunities in the area. The lunch was also attended by Lee Yi-der, Director-General of the county’s Urban and Rural Development Department and Yin Fong-lan (鄞鳯蘭), Director of the Information and International Affairs Department. 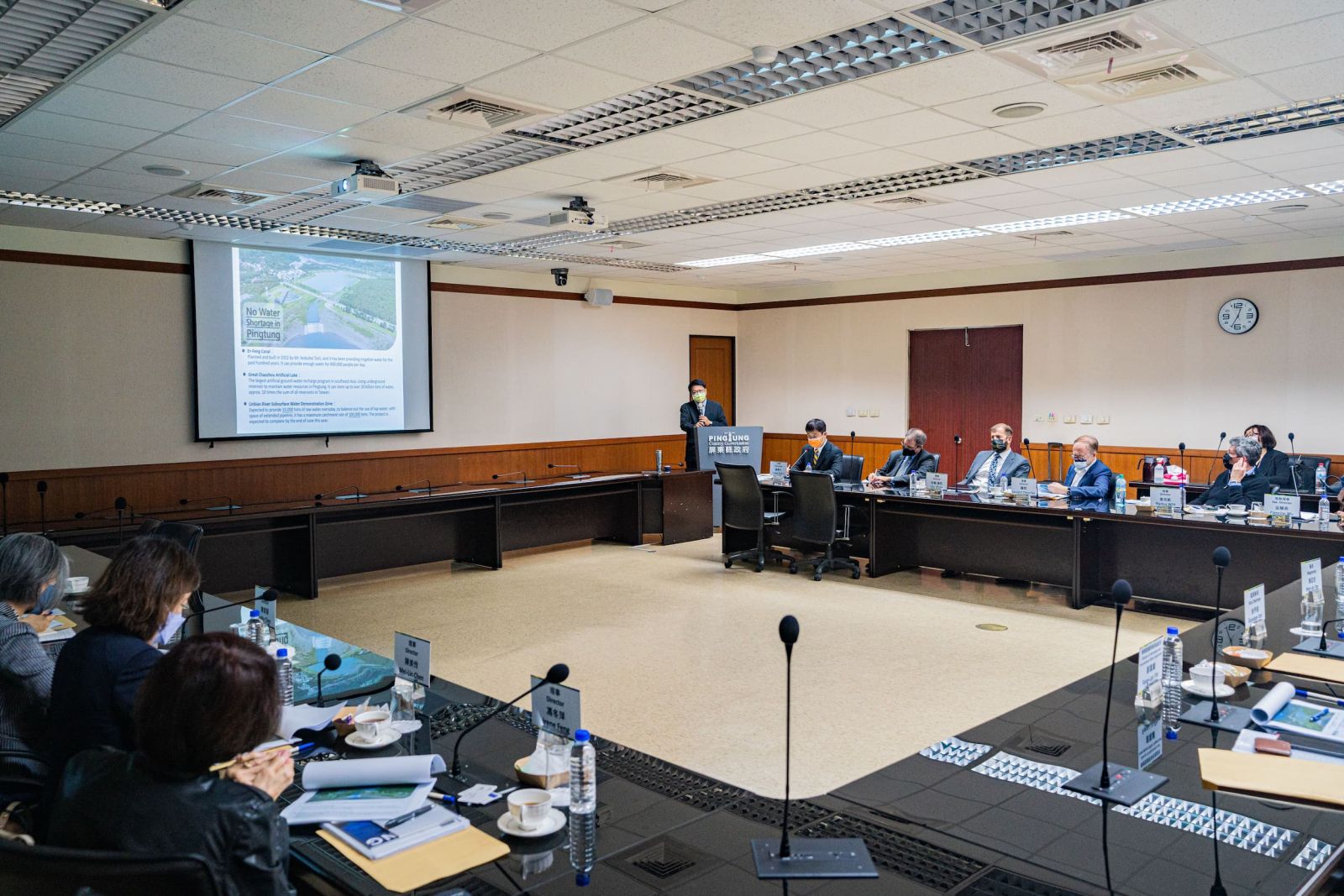 Magistrate Pan giving a presentation to directors at the lunch meeting

After lunch, the delegation visited the Pingtung 1936 Tobacco Culture Base, the site of a disused tobacco factory, which has been converted for the purposes of educating visitors on the cultivation and processing of tobacco, an industry which is now in decline in Taiwan. The factory retains some of the old machinery and processing equipment. Adjacent to the factory, there are a number of other exhibits displaying some of Pingtung’s culture and natural environment, using projectors and music to create immersive experiences for visitors. 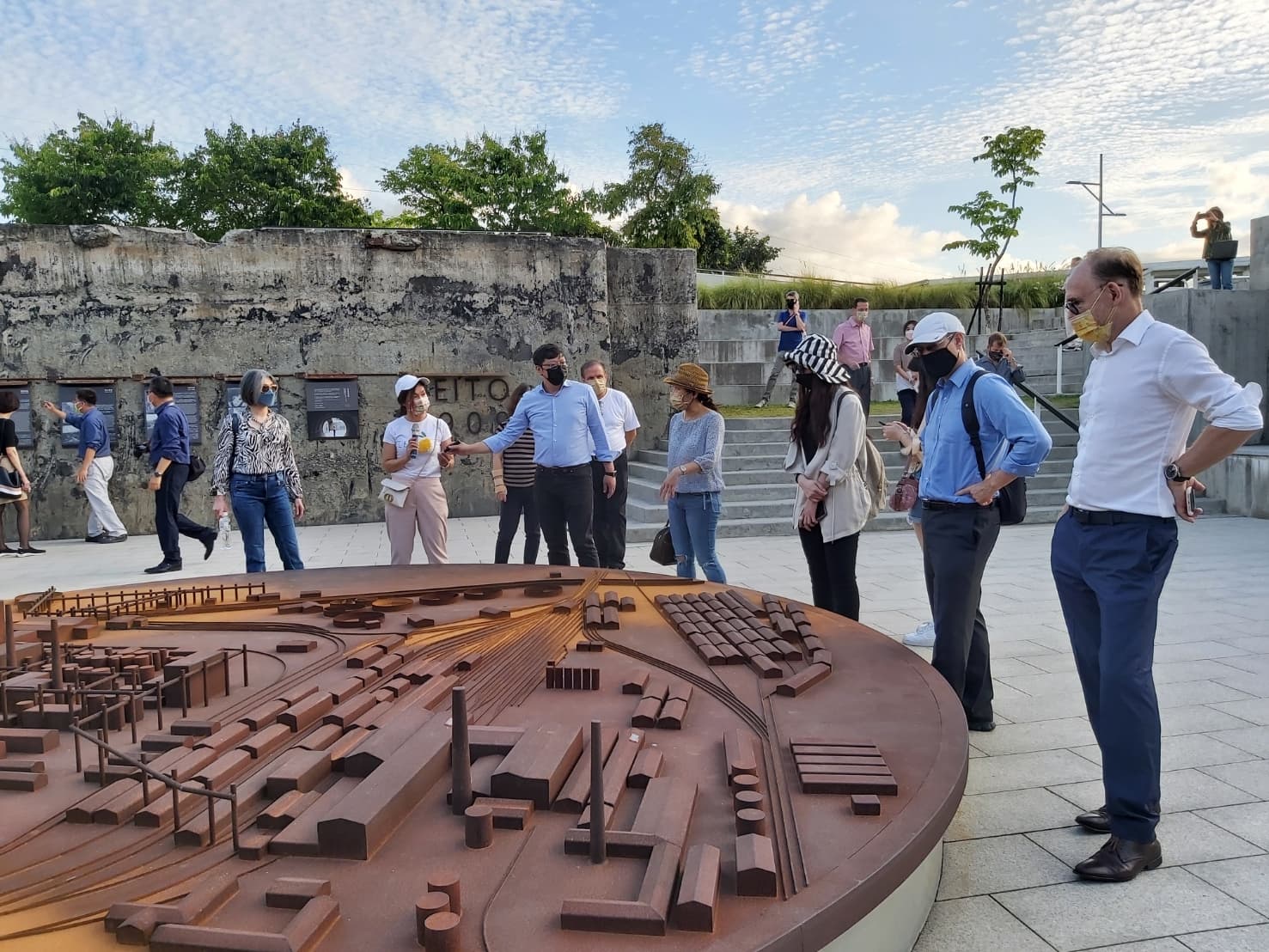 The Saturday morning programme began with a visit to the Victory Star VIP Zone. Originally known as Victory Village, it was built during the era of Japanese occupation of Taiwan. The zone has a number of Japanese-style dormitories that have since been refurbished for other uses. The site was chosen because it was near Pingtung Airport, which was the first airport built in Taiwan in 1921 by the Japanese military. The houses on the site were used as temporary accommodations for Japanese military officers. Following their departure from Taiwan after World War II, the houses were used by the families of military personnel of the Nationalist Government, which arrived in Taiwan from China after the Chinese civil war. Houses in the zone include the original house of General Sun Li-jen. In 1997, the government authorised the building of new housing for military personnel and their families on land adjacent to the original houses and, when they moved, the original houses were refurbished and converted to other uses, including specialty shops, bookstores and restaurants. 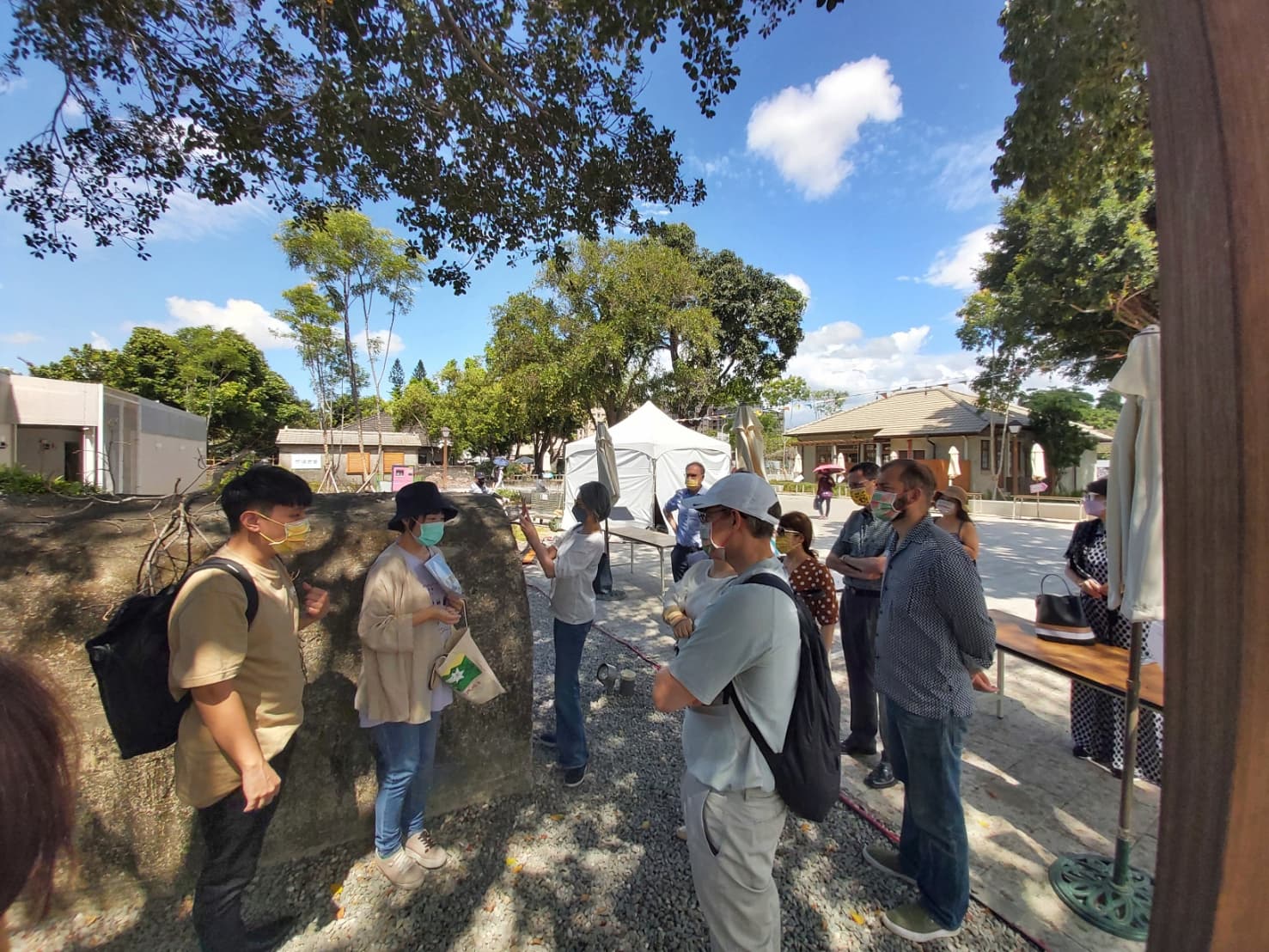 At the Victory Star VIP Zone

The next stop in the morning tour was a visit to the Pingtung Cacao Park, a functioning cacao farm and chocolate producer. During the visit, delegates were able to view cacao trees and sample cacao fruit and were given an introduction to the cultivation and processing of cacao.

Pingtung’s tropical climate make it ideal for growing cacao all year round. When cacao trees are young, they need about half sunlight and half shade for the first three years of growth, after which they need full sunlight to grow and produce fruit. This has been made possible because Pingtung has an abundance of betel nut trees. Farmers have planted cacao trees under betel nut trees, and after three years, cut down the betel nut trees. This makes sense both for environmental and economic reasons because betel nut trees damage the environment, unlike cacao trees. Meanwhile, the demand for betel nuts has declined significantly due to concerns over the carcinogenic properties of betel nuts (it is one of the leading causes of oesophageal cancer) while, conversely, demand for cacao is growing. 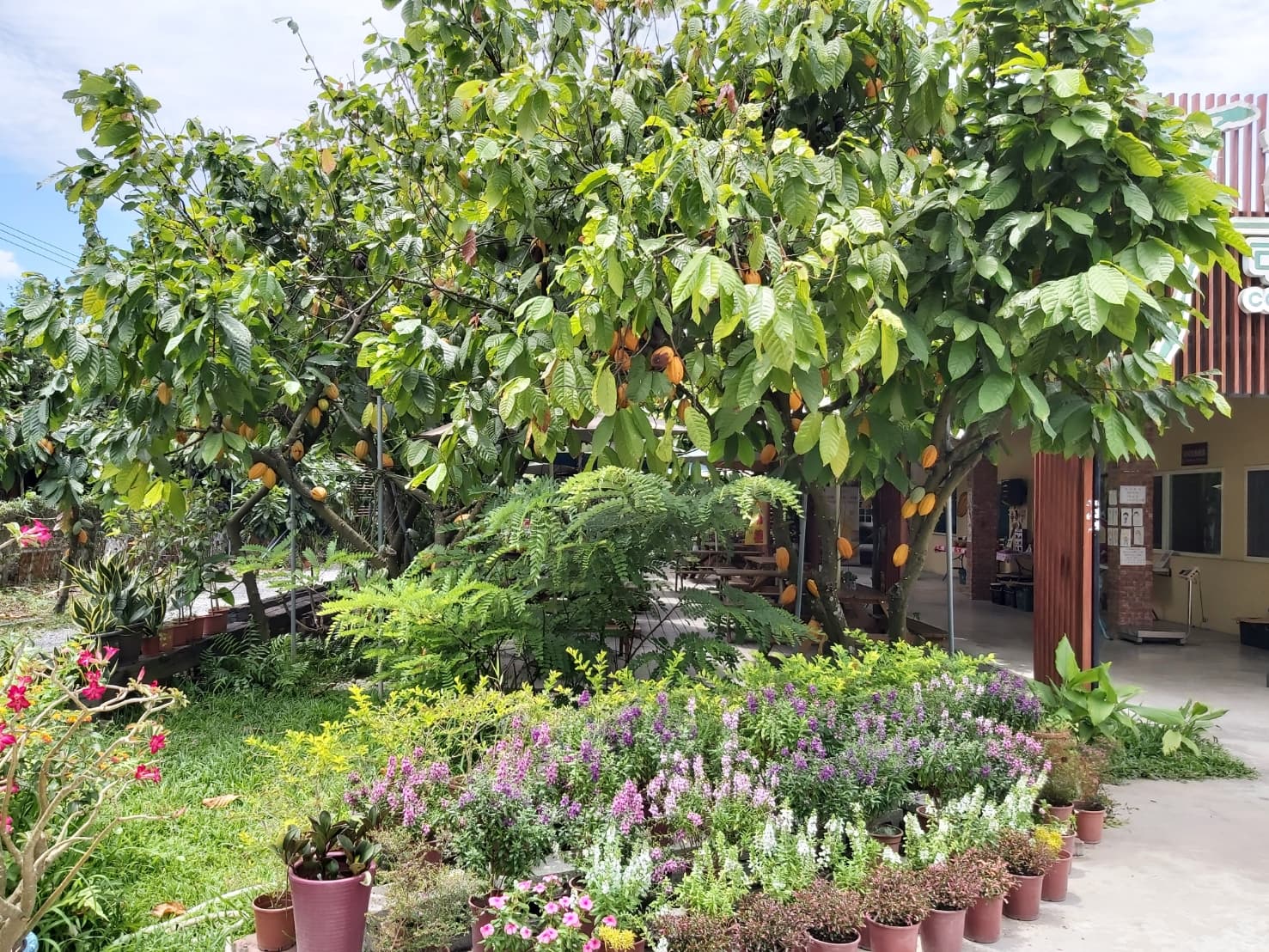 Unlike most flowers, which are pollinated by flying insects, cacao tree flowers are pollinated by ants. It takes about six months for a cacao fruit (or pod) to grow to maturity. The ripe pod contains raw beans, which visitors were able to sample. Without processing, the beans are soft and have a fairly neutral flavour that don’t taste much like chocolate. To be made into chocolate, the beans need to go through several processing steps:

Fermentation: The beans are covered for a few days so microbes that feed on the pulp can ferment the beans. This starts to develop the distinctive chocolate flavour and aroma.

Drying: The fermented beans are dried for several days (in the sun in the case of this farm, but machines are used at larger facilities).

Crushing: The beans are crushed and separated from their outer hulls, resulting in broken cacao pieces called nib.

Grinding: Nibs are ground into a paste, ready to be made into chocolate products. To make cocoa powder, the liquid, which is roughly 50% fat in the form of cocoa butter, is pressed to remove most of the fat.

After sampling some full cocoa butter chocolate, delegates moved on to lunch at a restaurant specialising in seafood near the Donggang Port, which was attended by Hsiao Yu-lung (蕭裕隆), Deputy Director of the Information and International Affairs Department and Lu Chun-chung (盧俊中), Director of the Green Energy Promotion Office.

The final stop on the tour was a visit to the Pingtung Green Energy Ecological Sustainable Education Park, which is powered completely by solar energy from PV arrays on site. Visitors were given an introduction to the facility and solar power in Pingtung.

The facility has its own independent microgrid system, which includes battery storage. This allows it to continue operating during power outages, such as the large-scale power outage experienced across Taiwan earlier this year.

Pingtung owes much of its success in solar power to its Green Energy Industry Promotion Office, which was established to assist manufacturers and developers to invest in Pingtung's green energy projects. By offering a single window administrative processing service as well as a platform between landowners and developers, the office helped to increase the capacity of solar energy while simultaneously addressing both environmental and social issues.

Over the years, owing to excessive use of ground water, many land areas of Pingtung have subsided while severe flooding from several severe typhoons had resulted in some soil becoming salinated. As a result, large areas of land became unsuitable for agriculture. The county government then designated these as priority areas for the development of solar arrays. In addition, the government identified ponds and other bodies of water suitable for floating arrays as well as building rooftops.

Given that Pingtung has a growing number of ageing and elderly farmers, the option to install solar arrays on their unusable land and sell the power generated from them, also provided a new source of income for these farmers, thereby solving a growing social welfare issue.

Floating solar arrays tend to more efficient because water cools down the panels. Other benefits include less evaporation of water (due to shading by the panels) as well as attracting wildlife (birds have built nests in the arrays’ support structures).

While Pingtung continues to add solar power capacity, it remains constrained by how much it can add by the grid capacity of Taiwan Power Company (Taipower).

Tour arrangements were kindly made by Pingtung County Government staffers from the Information and International Affairs Department, Chou Jia-an, Winnie Wu and Daniel Lu, who accompanied the delegation for the duration of the trip. 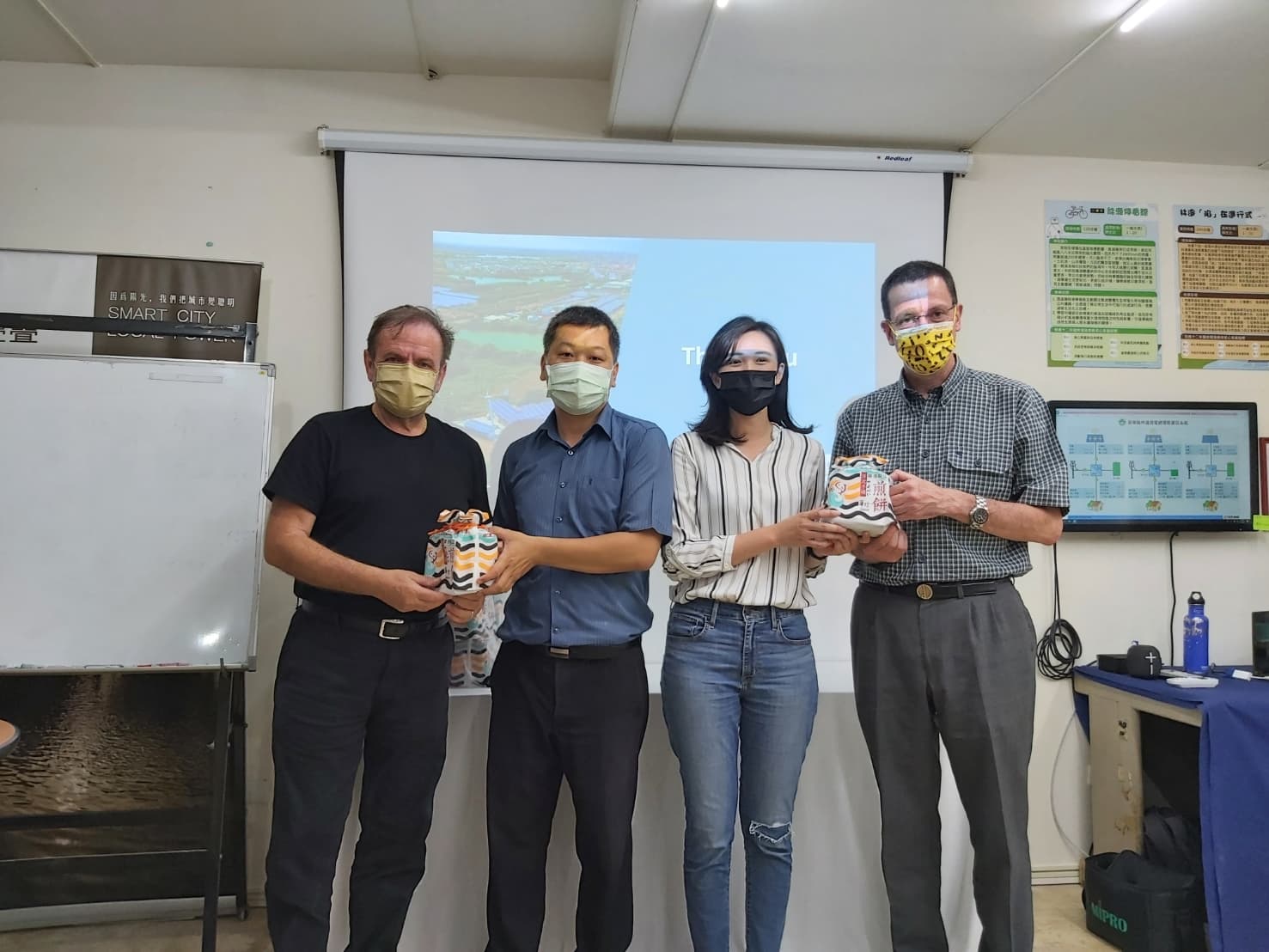