Impact of the Ukraine crisis on Taiwan

The invasion of Ukraine by Russian military forces has sparked renewed concerns and debate about Taiwan's security, but will it lead to a shift in defence spending priorities and military preparedness? 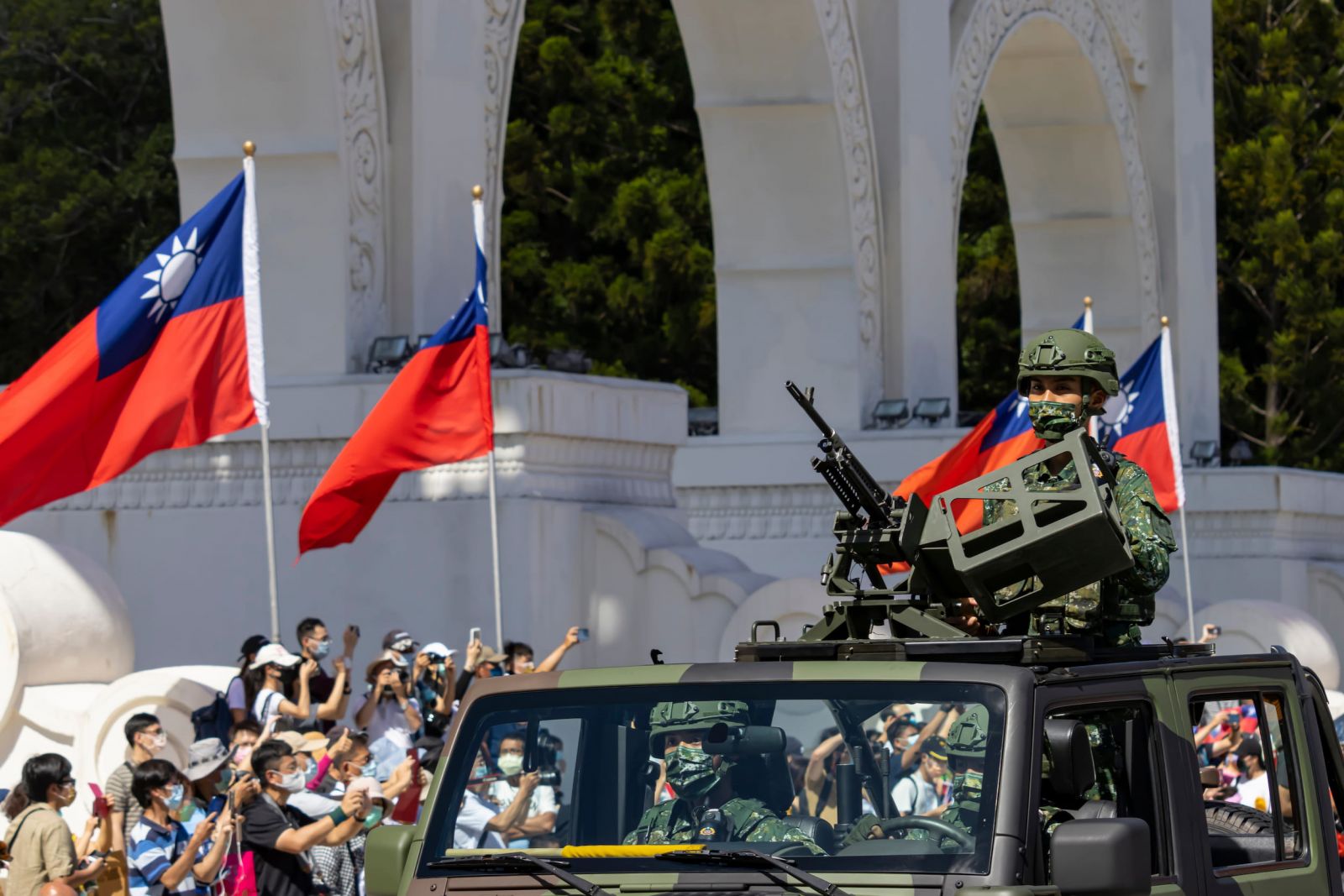 The invasion of Ukraine has prompted renewed discussion of what Taiwan faces in the event of a Chinese military invasion. Namely, the invasion is seen as offering a parallel for Taiwan regarding military threats from China.

And, certainly, one has seen a great deal of speculation in international media since the invasion about whether Taiwan could potentially be next. Some of this commentary even suggests that China could take advantage of the situation in eastern Europe to mount an invasion while the world’s attention is focused elsewhere.

This is unlikely considering the fact that a Chinese military invasion of Taiwan would be known months in advance. Satellite imagery would provide advance warning of any hypothetical invasion and it would require time for China to move troops into place; even with the invasion of Ukraine, Putin spent a month moving Russian troops into place before this could take place. But the Tsai administration has sought to reassure on this front nonetheless, with Tsai emphasizing in public comments that she had ordered the military to be on alert and that the government had established a task force on the matter.

No doubt Tsai and other policymakers are cognizant of the fact that a Chinese military invasion could not simply occur at the drop of a hat. Nevertheless, members of the voting public may not necessarily know that this is the case. Hence the need to reassure.

Likewise, the US has sought to reassure of strong security ties, with the Biden administration dispatching a delegation of former defence officials to Taiwan in order to signal the US’s continued support of Taiwan. Although the defence delegation was largely overshadowed in Taiwanese media by a visit from Trump administration secretary of state Mike Pompeo, this visit was quickly announced after the invasion of Ukraine, and was deliberately bipartisan in composition, so as to signal support of Taiwan from both Democrats and Republicans.

The attempts by Tsai and other government officials to reassure illustrates the divergent reactions of experts and members of the general public. Experts have more commonly pointed to how Taiwan and Ukraine do not make for general comparisons.

For one, the logistical difficulties of launching a beachhead invasion are many times more complicated, compared to a land-based assault such as the invasion of Ukraine. China currently lacks the lift capacity, or means of transportation, to bring troops in sufficiently high numbers to Taiwan in order to conduct a long-term occupation. The death toll would be significantly higher, given how modern military science favours the defender when it comes to beachhead invasion.

To this extent, Taiwan has had decades to prepare for an invasion, and some geographic challenges are posed by Taiwan itself–it was not a mistake that Chiang Kai-shek chose Taiwan to flee to, after all. It is only a few times a year that the weather conditions are right for launching an invasion, which are periods of heightened alert for the military.

Taiwan is also of crucial significance to the world economy, particularly with the world dependent on it for semiconductor manufacturing. Apart from the fact that this increases the incentive for allies to defend it from a Chinese invasion, Taiwan benefits from its historical relationship with the US, its long time security guarantor from the threat of a Chinese invasion. The ROC government would not have been able to maintain its presence in Taiwan for decades without US backing. Indeed, given these historical political and economic ties, the Tsai administration is currently angling at trade talks with the US to further strengthen such linkages.

Japan, too, could potentially act to defend Taiwan from a Chinese invasion. Apart from significant shows of friendship in recent years, such as Taiwan being the world’s largest donor to Japan after the 2011 Fukushima disaster, Okinawa is geographically closer to Taiwan than the Japanese archipelago. As such, even with the US military presence in Okinawa notwithstanding, Japan might be obligated to respond to a Chinese invasion of Taiwan in defence of its domestic population. It may not be surprising, then, that given the strength of the Japanese military as a potential deterrent to China, the Tsai administration is also aiming at economic dialogue with Japan in the hopes of a trade agreement. Recent polling suggests that more Taiwanese believe in the likelihood of Japan coming to Taiwan’s defence against an invasion from China compared to the US.

In terms of other policy considerations, the Tsai administration is likely to try and pursue arms purchases that boost asymmetric warfare capacities, with Ukraine seen as a country that has successfully been able to use asymmetric warfare in order to hold off a much larger enemy.

In the past, the Tsai administration has been criticized for flashy purchases that it can tout as a fait accompli in domestic politics, such as tanks, over arms purchases that would serve practical use in asymmetric warfare. However, the onus cannot be placed solely on the Tsai administration, in that as Taiwan’s major arms supplier, the US also has a say over what arms Taiwan is allowed to purchase. This, too, can be subject to domestic political considerations where America is concerned.

Given the effective use of drones against Russian forces in Ukraine and calls for using drones to increase surveillance and coordination practices, the Tsai administration may prioritize such purchases in the future, or emphasize domestic development. Either way, the Ukraine crisis gives the Tsai administration stronger political leverage to increase the amount of GDP spending that goes to the military, a longstanding demand of the US.

Ukraine has also been framed in domestic political discourse as an example of an instance in which army reserves were called upon to resist the invader with great success. Consequently, there have also been calls to lengthen the period that reserves are called up for training in Taiwan, to improve the quality of training for reserves, or to include women in the reserves. There have also been calls among the general populace for Taiwanese to emphasize resilience training about disaster relief and medical aid in the event of an invasion.

More contested, however, has been the notion of lengthening the military draft from the current four months for men born after 1994 to one year. The Tsai administration may be somewhat reluctant to consider the idea, given how polling shows low willingness to serve in the military among young people. This is perhaps due to the association of the military with conflict, corruption and lacking transparency, or pan-blue ROC nationalism that is outdated with the identification of young people as Taiwanese, rather than Chinese.

Certainly, the Tsai administration has come under fire from some opposition parties for failing to raise this idea. This includes some members of the KMT and the pan-Green NPP, which has come out in support of the idea.

As the pro-China party in Taiwanese politics, the KMT probably just jumped on board with the issue in order to snipe at the Tsai administration and is unlikely to be earnest about the idea. Deep blues, as well as former president Ma Ying-jeou, have sought to use the invasion of Ukraine to sow doubt about US support for Taiwan, claiming that the US is only likely to sell arms to Taiwan but unlikely to ever come to Taiwan’s aid in a military conflict.

But some in the cabinet reportedly believe that the time is ripe for proposing an extension of the draft. And, indeed, if the Tsai administration decides to commit to the idea, the Ukraine crisis presents the most significant opportunity in the past ten years to call for extending the military draft.

Otherwise, even if the draft is extended and efforts are made to strengthen Taiwan’s military reserves, questions remain regarding the allocation of forces. China is likely to take away from the Ukraine invasion that it should emphasize a quick decapitation strike, to kill off the political leadership so as to prevent organized military resistance that would lead to protracted warfare.

But, in this respect, there have been proposals to organize a territorial defence force; this would have to be decentralized enough to act across multiple theatres and contribute to efforts at not only resistance but medical and disaster relief, while also maintaining centralized coordination as part of broader efforts against an invader. The form that this could, should, or would take is also likely to be debated in the near future.

And there are no clear-cut easy answers for Taiwan. The invasion of Ukraine has prompted the most significant discussion of military readiness in Taiwan in a decade or more. Concerns about Taiwan’s relation with its longstanding security guarantor had already come up during the Trump administration, given flip-flops by Trump at a time of increasingly hawkish rhetoric against China. Nevertheless, under Biden, there have continued to be questions about a potential wane in global American power, particularly after the US withdrawal from Afghanistan.

Whether political reactions in Taiwan after the invasion of Ukraine leads to a rethinking of the military draft remains to be seen, with military experts stating that the evaluation period for whether to make this decision should not take more than a year. Yet it may not be surprising, then, that political reactions after the invasion of Ukraine are likely to push Taiwan to ponder questions of self-reliance, and re-evaluation of longstanding security relations.